Get email updates from dylan: 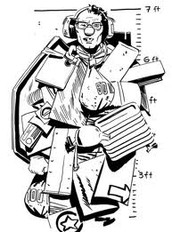 The government wants to control everyone because they put handicaps and weights on people to keep them from being better than anyone else, or being different. However, the government is actually just keeping the people down from rising against them and causing a revolution. There is an example of this in "The Hunger Games" when the government controls everything and the only rules by fear and an iron fist.

How does language influence the world

language influence the world because it restricts people from communicating with everyone else, because if you do now know the language that that person speaks the you cannot speak with them. However, language allows people to talk and debate ideas, making it so that we are able to innovate and improve things.

Do individuals or external forces have more power to impact change?

Why does the desire to protect often lead to the denial of rights.

The desire to protect people leads to the denial of basic rights because, people believe that while they may be guarding them from something, they are also not allowing them to know why or what they are being guarded from. This soon leads to a power disorder.

A good balance between freedom and policy is when people know what they are facing and how it affects them, but the do not have the power to affect it. However, the people need to be able to give their ideas, and they need to be taken into consideration.