John Hurley was recently sworn in as a Director for the Bremerton School Board, position 1, which has been vacant since June.

“I am passionate about education, and have worked in early childhood education my entire adult life. Since my children attend school in the district it was important for me to be involved and contribute this amazing District and all of the important programs it has to offer.” -- Director John Hurley. 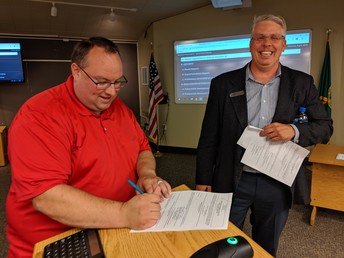 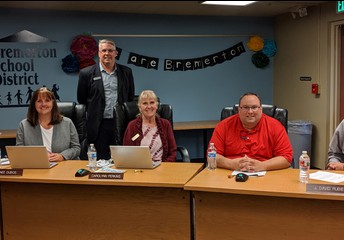 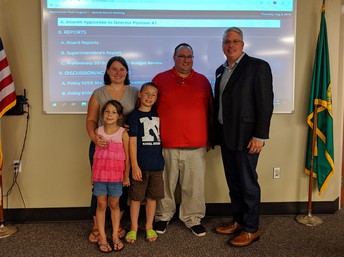 www.kitsapsun.com
John Hurley will fill the position vacated by Naomi Evans and will serve through the Nov. 5 election

Recently, a survey was sent out to families in the District to get feedback on our communication efforts. We are also inviting members of the community to take this survey as we work to improve communication and engagement with the broader Bremerton community.

We invite you to take this brief survey and tell us what you think!

The doctor is in: New school-based clinics will serve students, teachers and families

Some reminders about.... Remind!

As you are thinking about your parent communication approach for this year, we encourage you to use Remind to communicate with your students, athletes and parents/families. Remind is the RECOMMENDED and the ONLY District-endorsed student/parent communication tool (other than Skyward) for staff and coaches because all messages are archivable and retrievable.

We pay for a Districtwide account that provides a Remind account for every staff member who needs to communicate with students, athletes, club members and their parents/guardians.

Please see the information below and take note: If you use Remind, your account is backed-up for public records retention purposes -taking that off of your plate. Using Remind also addresses some of the boundary invasion issues you've learned about in your recent training. 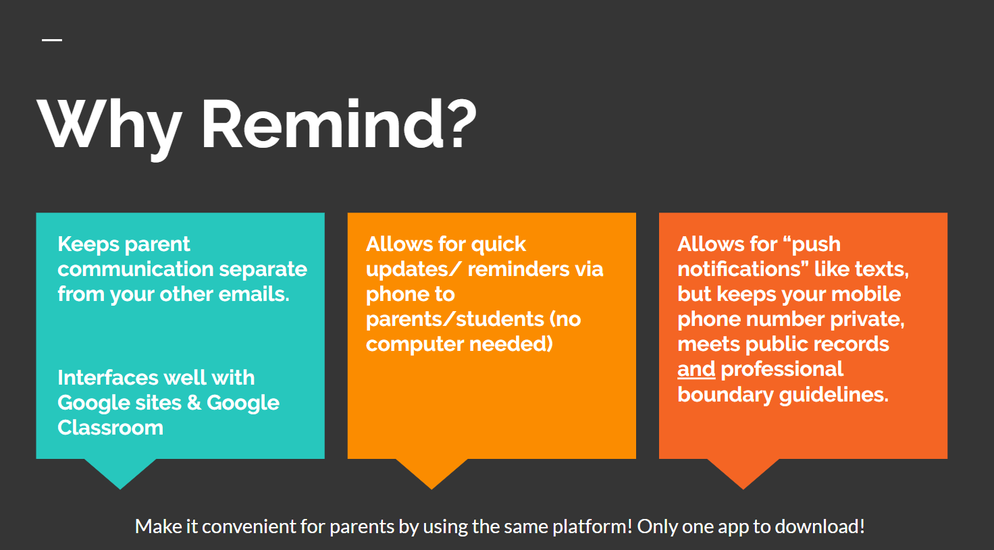 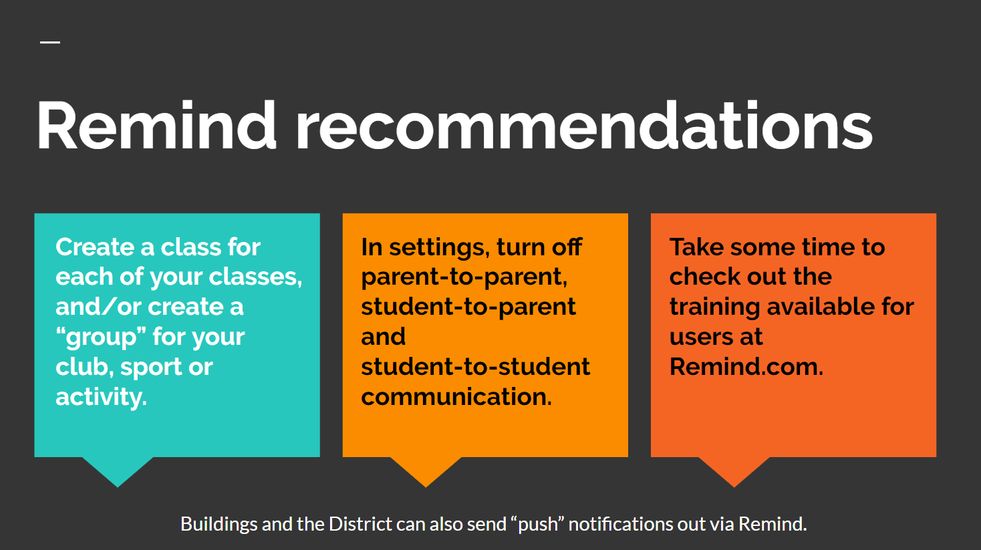 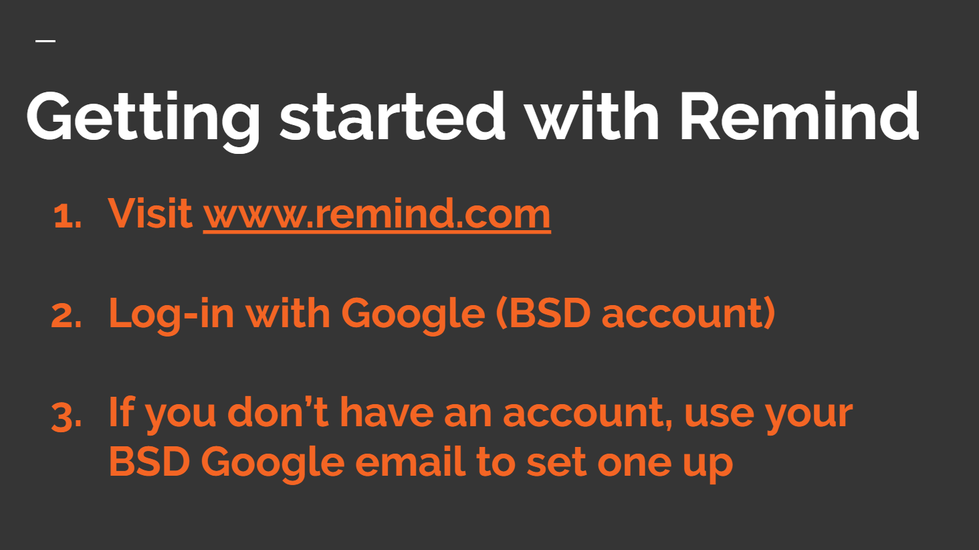 A few more details about setting up Remind:

Download the Jump Start flyer in English and Spanish! 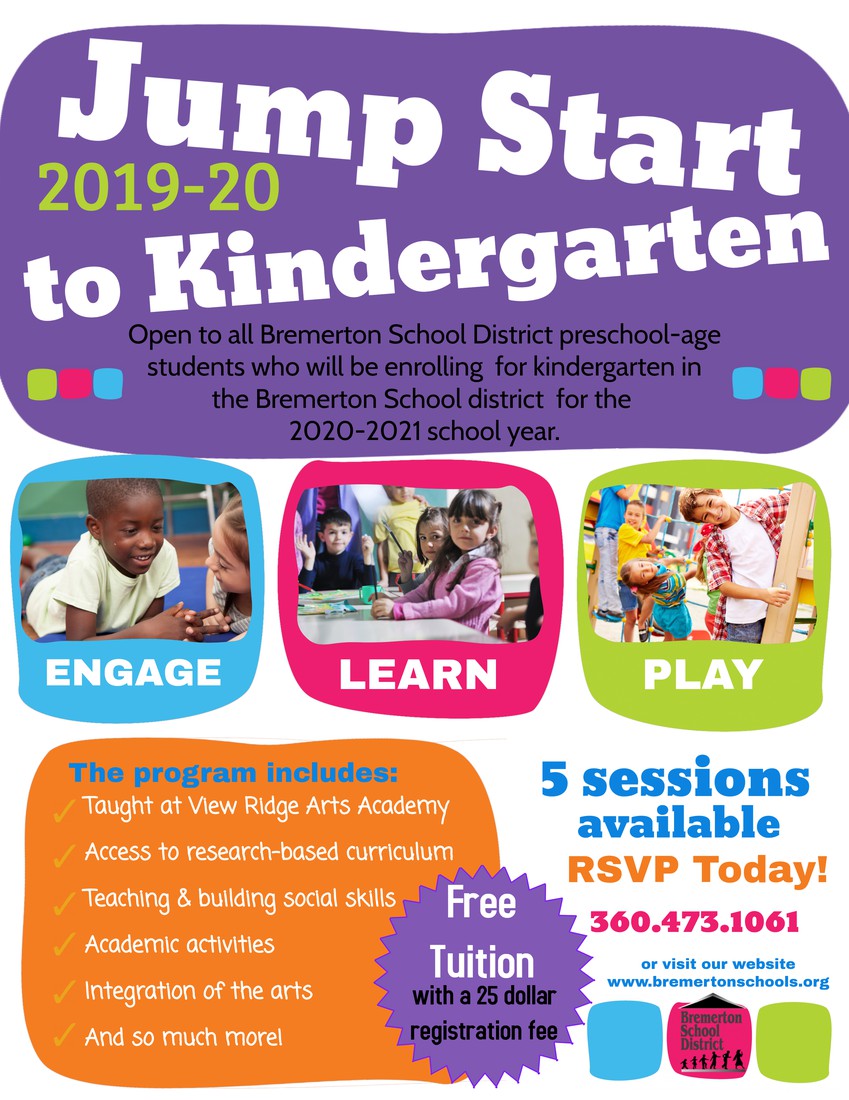 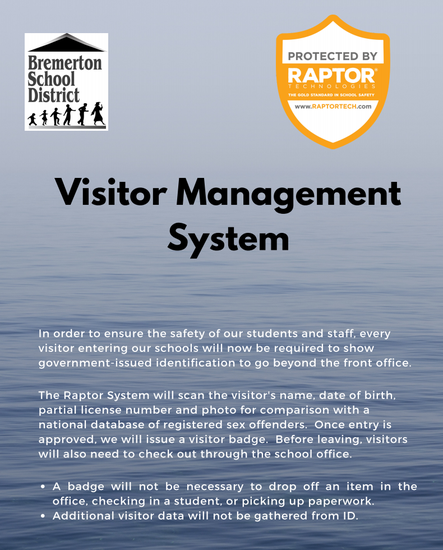 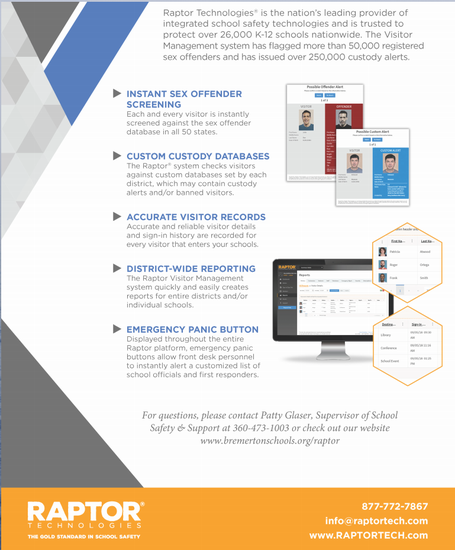 The SEBB Program’s first annual open enrollment starts October 1, and employees should get the School Employee Initial Enrollment Guide in the mail in mid-September.

To ensure you receive this important booklet, make sure your correct mailing address is in our system before September 3.

If you have a change of address it will need to be submitted to the Human Resources Office in writing by September 3 (email is OK). Download the address change form below.

Compiled by Ioanna Cossack, Board Secretary

You can find these reports, other attachments, and more information on the agenda/BoardDocs site

Compiled by Ioanna Cossack, board secretary

You can find these reports, other attachments, and more information on the agenda/BoardDocs site

In cased you missed it on day #3 of Summer Institute.... 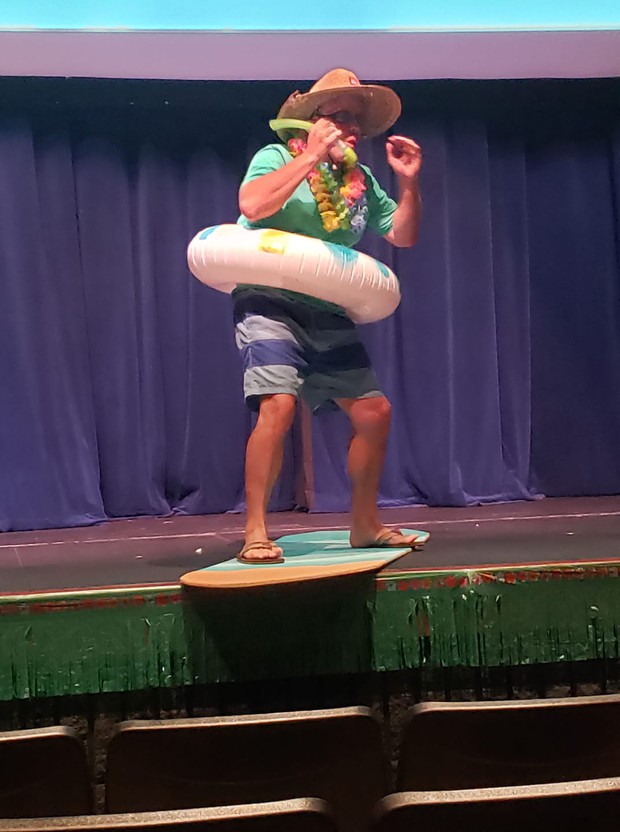 Thank you to the food trucks who kept us well-fed at Summer Institute!

We also want to give a shout-out to our awesome Child Nutrition Services (CNS) staff for their hard work and great food during the event! 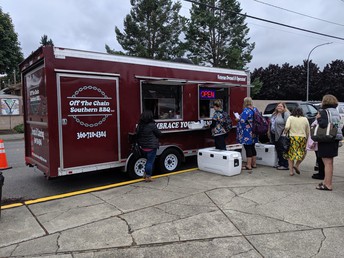 Off the Chain Southern BBQ 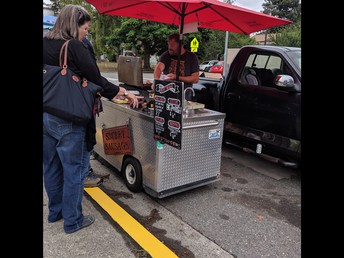 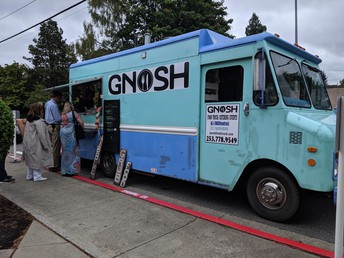 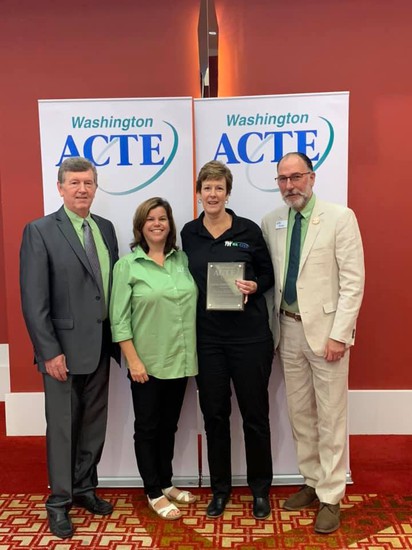 WST staff honored by the Washington Association of Career and Technical Administrators (WACTA).

The Washington Association of Career and Technical Education (WA-ACTE) is the premier association for career and technical education in the state of Washington. The award winners were announced during the Awards Breakfast at the Washington ACTE Summer Conference in early August in Spokane.

The Washington ACTE Career Guidance Award recognizes school counselors and career development professionals who have demonstrated commitment to connecting students with opportunities for success, shown innovation in career exploration and development, and have advocated for CTE as a viable option for all students.

Nora Zollweg is the Student Services Coordinator for West Sound Technical Skills Center. In 2011, Nora decided she missed working with students and took a position as Student Outreach Coordinator with West Sound Technical Skills Center. Eight years later, Nora is still working at WST though her position has been changed to Student Services Coordinator, which covers a comprehensive approach to student support and success. Along the way, Nora has earned a Bachelor’s Degree in Human Services and Master’s Degrees in Organizational Leadership and Human Resources, plus a Master’s Degree in Educational Leadership with a Principal’s endorsement. Nora has also completed her CTE Director’s training through OSPI and holds a CTE Director’s credential. Nora has been a Washington ACTE member since 2004.

Shani Watkins was also named WACTA Director of the Year, and West Sound Tech was awarded the 100% membership award (WST has 100% Washington ACTE membership participation from each and every member of their Career and Technical Education staff.).

The Washington ACTE Awards promote merit in Career and Technical Education (CTE) by recognizing individuals who have made extraordinary contributions to CTE. Award winners serve as inspirational leaders to Washington ACTE: they embody the core values of serving students and being committed to CTE. The state winners will progress on to compete at the regional level next year at the ACTE Region V Conference in Lake Tahoe, Nevada, April 22-25, 2020. The Washington Association for Career and Technical Education is the state’s largest not-for-profit association committed to the advancement of education that prepares youth and adults for successful careers. Washington ACTE represents the community of CTE professionals including educators, administrators, researchers, guidance counselors, and others at all levels of education. Washington ACTE is committed to excellence in providing advocacy, public awareness and access to resources, professional development, and leadership opportunities.

"We are Bremerton" District video

Google and YouTube are not playing nicely in the sand box right now, and the District YouTube channel has been deactivated. We are working on this. That is the preferred version because it has subtitles. However, we wanted you all to have a link to the video (minus subtitles) should you want to view/show it. You can view the link below IF you are logged into your BSD Google account. 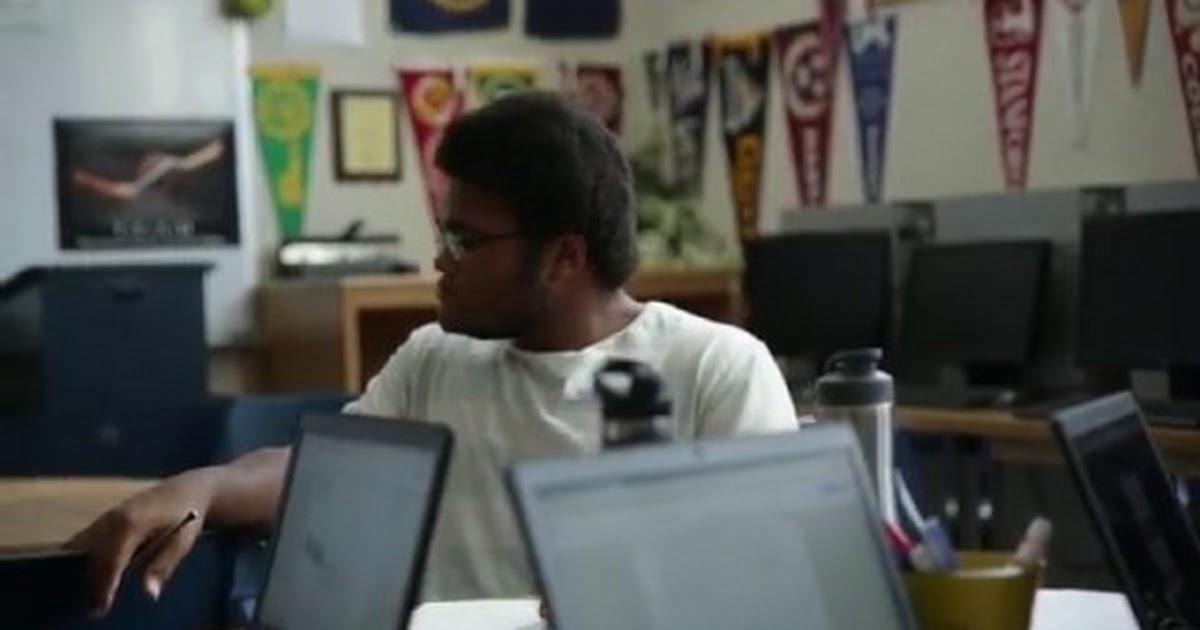 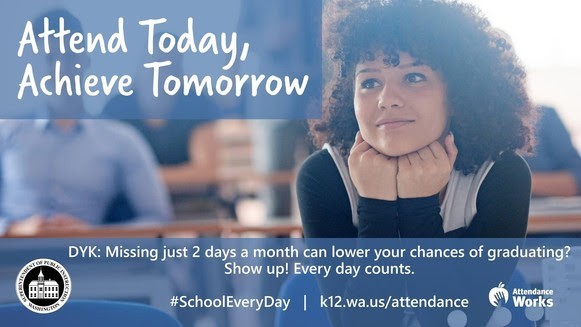 AVID has been featured in an op-ed published by USA Today titled, What can we do to help low-income kids graduate from college? 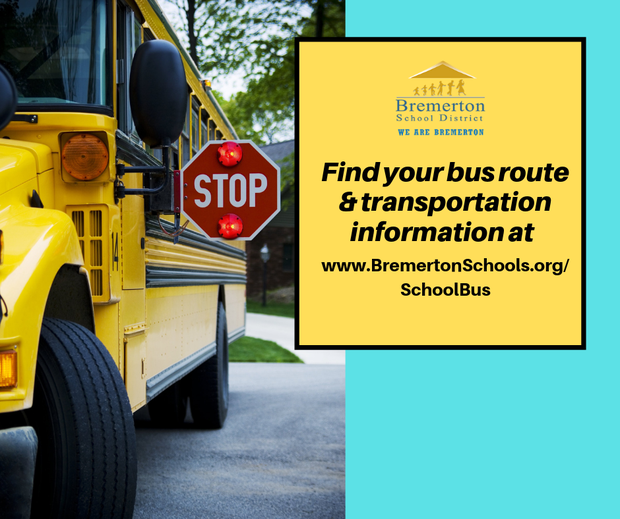 The UW Football Teacher/Staff Appreciation promo link is now available! The discount is available to teachers, staff, volunteers and their family and friends for the September 14th UW game vs. Hawaii at 4:30PM. Click here to purchase discounted seats (up to 8). No additional promo code is needed. This link will allow them to buy 1-8 seats at the discounted rate. 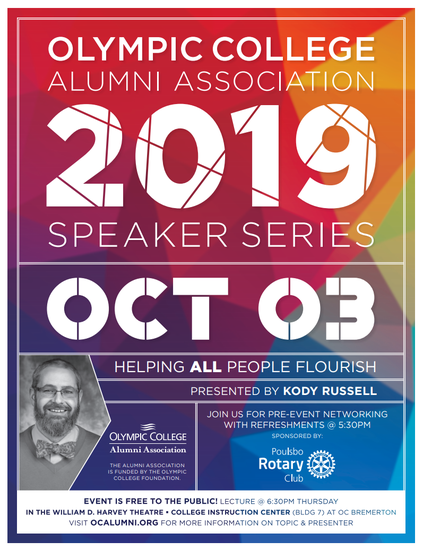 The Office of Superintendent of Public Instruction will conduct elections this fall to fill positions on the State Board of Education and board positions on the state’s nine educational service districts (ESD). Learrn more here! 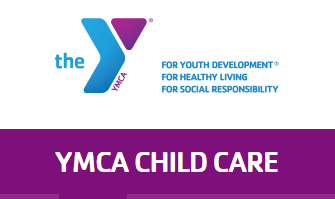 Beginning in the 2019-2020 school year, all district staff will receive 50% off fees related to YMCA Child Care*. This includes Before and After School Care programming and Child Care Day Camps.

*Please note that this reduced fee ONLY applies to YMCA Child Care related fees. Other YMCA fees, such as membership to a facility branch, will remain the same. 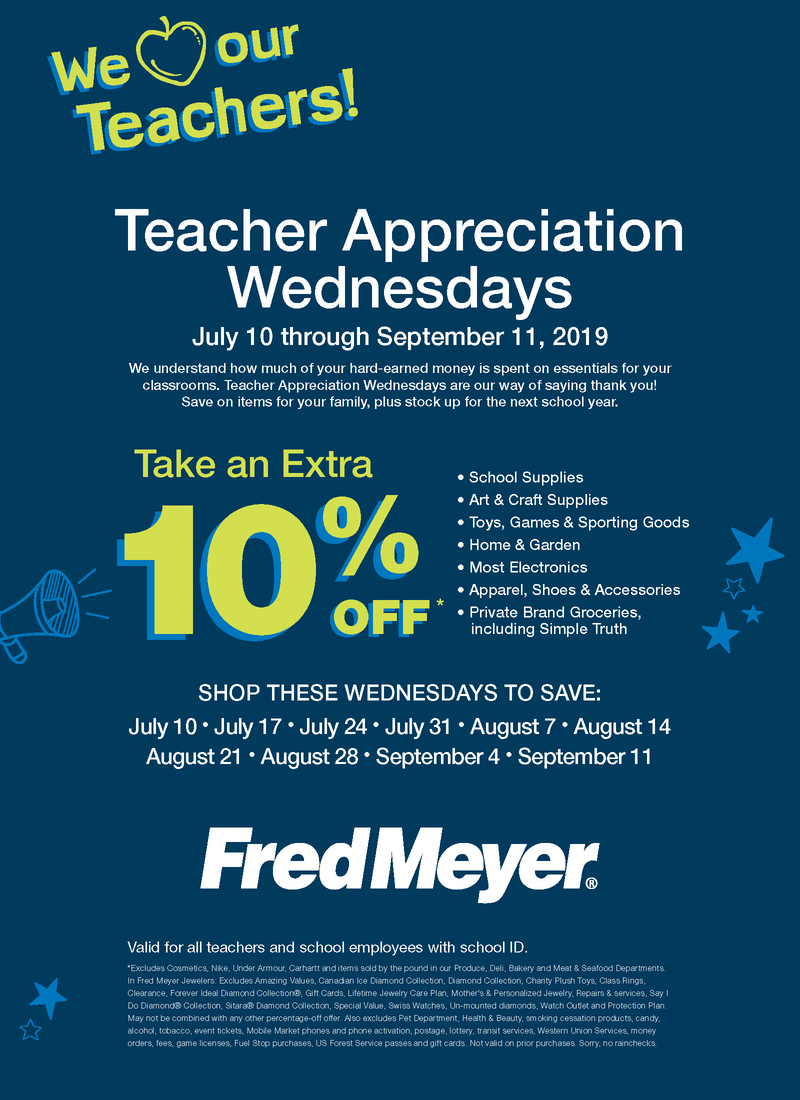 Nominate a local business for a Chamber award!

Nominate a local business for the 2019 Bremerton Business Awards!

The Professional Educator Standards Board (PESB) is offering up to six $15,000 grants to support educator learning through professional growth plans (PGPs). Each grantee will be required to support at least 20 educators completing PGPs in a learning community. Grant applicants must describe how they will include equity in identifying participants and designing their local grant structure. See application and additional details.

Learning communities will focus on PGPs aligned to:

What is a PGP?

How can grant funds be used? 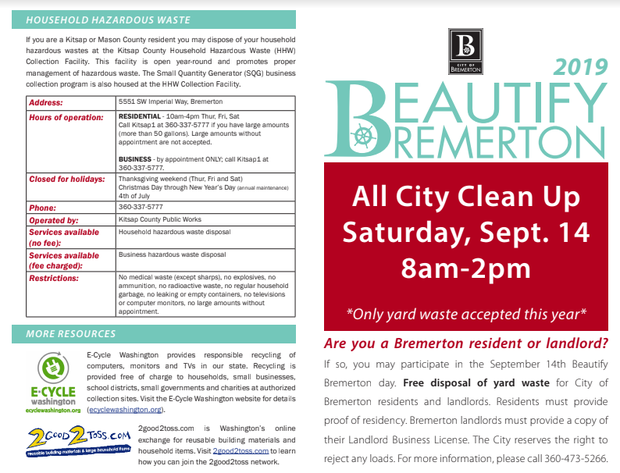 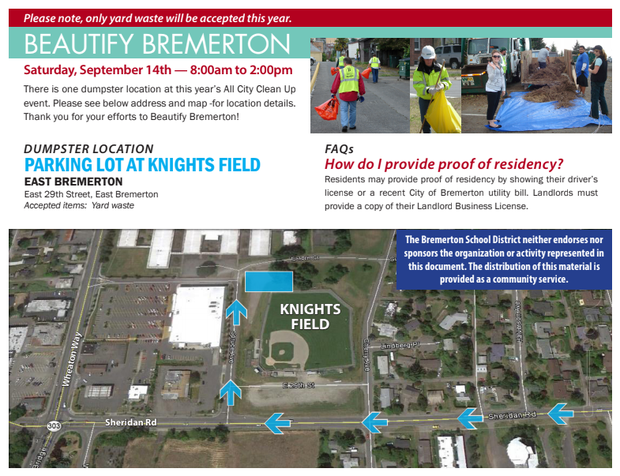 An update from Kitsap County:

The U.S. Census Bureau launched address canvassing throughout the country this month, including here in Kitsap County, as the first major field operation of the 2020 Census. Census Bureau employees (listers) have started walking local neighborhoods verifying addresses. The listers are area residents hired to help with the project. Their work continues through mid-October, with the actual census count getting underway in 2020.

Listers identify every place where people could stay, whether temporary or permanent. They compare what they see on the ground to the existing census address list and then verify, correct or add address and location information as needed. If the lister does not find anyone home, they will verify and update the address information by observation.

Address canvassing improves and refines the Census Bureau’s address list of households nationwide, adding new housing developments, changes in existing homes and other housing units that did not previously exist. This is necessary to deliver invitations to respond to the 2020 census.

The address list plays a vital role in ensuring a complete and accurate count of everyone living in the United States.

Identifying address listers who may knock on your door

To help identify address listers, employees will have badges and briefcases indicating their affiliation with the Census Bureau. They will knock on doors and ask a few simple questions to verify the address and any additional living quarters on the property for inclusion in the census.

Employees will introduce themselves as a Census Bureau employee, show their official government identification badge (sample below), and explain the purpose of the visit. People may also ask them for a picture from another source to confirm their identity.

About 30 percent of all addresses in Kitsap County will be canvassed. The 2020 Census: In-Field Address Canvassing (IFAC) Viewer provides county information on areas that listers will visit.

This operation is one of several activities the Census Bureau conducts for an accurate and complete count. The Census Bureau also partners with the U.S. Postal Service and tribal, state and local officials to update the address list.

For a brief video about address canvassing, including how to identify address listers, click here.

The 2020 Census officially starts counting people in January. Most households in the country will start receiving invitations to respond online, by phone or by mail in March 2020.

The U.S. Constitution mandates that a census of the population be conducted once every 10 years. Census data is used to determine the number of seats each state holds in Congress and how more than $675 billion in federal funds are distributed back to states and local communities every year for services and infrastructure, including health care, jobs, schools, roads and businesses.

If you have any questions or want to verify a lister, please contact the West Coast Regional Census Office in Los Angeles at (213) 314-6500. For more information on the 2020 Census, visit the Census Bureau website.

Census workers are still needed - paid jobs are available now in Kitsap County. See the flyer below or go to https://2020census.gov/jobs. 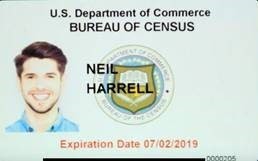 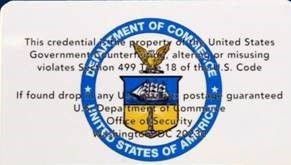 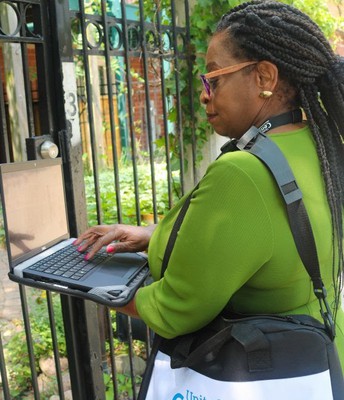 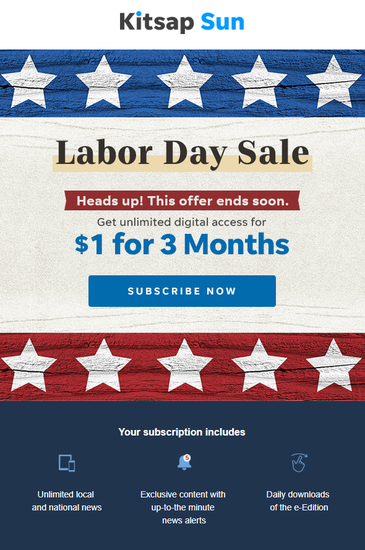 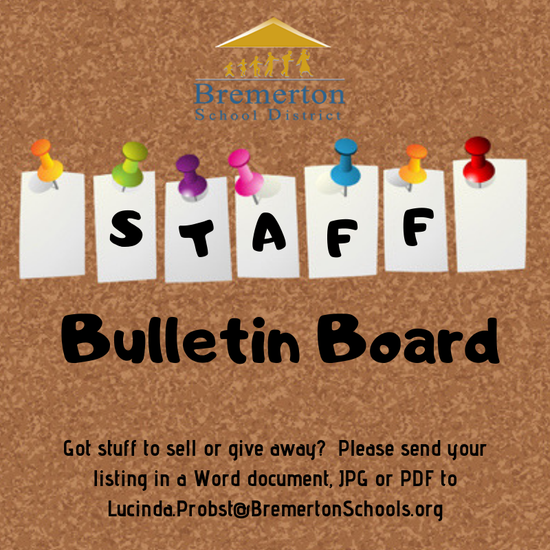 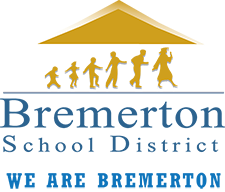 Follow Karen Bevers
Contact Karen Bevers
Embed code is for website/blog and not email. To embed your newsletter in a Mass Notification System, click HERE to see how or reach out to support@smore.com
close