Gilded is using Smore newsletters to spread the word online.

Get email updates from Gilded:

Jerk refers to a way that a meat, be it chicken, beef, pork, goat, fish, vegetables or fruit is seasoned and cooked. This style comes from Jamaica. The typical cooking style uses a marinade or paste that includes at least pimento, which is often called allspice, and scotch bonnet peppers, also known as habenero. The meat is then marinated and slow smoked over pimento wood. Pimentia o pimento is a Spanish word for pepper and early European explorers mistook this for black pepper, so they called it pimento.

According to most food history authorites, like Alan Davidson, and John Mariani jerk is a Spanish word that comes via the Peruvian word charqui, a word for dried strips of meat like what we call Jerky, in much of the world. The word started as a noun and then became a verb as in "Jerking" which meant to poke holes in the meat so the spices could permeate the meat. Jerk cooking experts like native Jamaican and author Helen Willinsky of "Jerk from Jamaica" says that the name Jerk also could have come from the turning of the meat in the marinade or from the way some folks will just jerk a strip from the roast on the BBQ. We just don't really know.

Here are some raw chicken breasts being marinated. They will be marinated for a day. 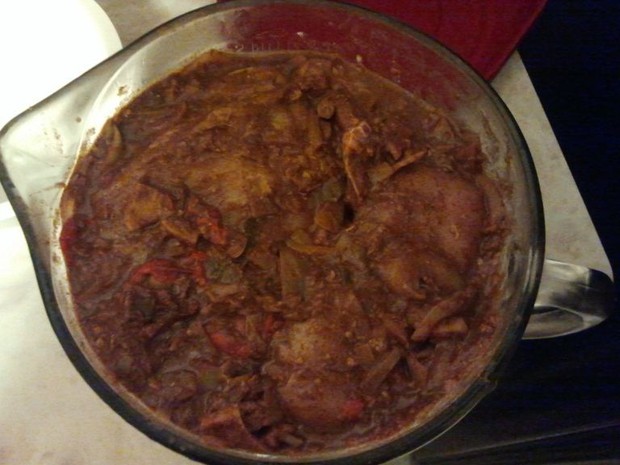 Ingredients in my recipe

My recipe is a little more asian flavored

Gilded is using Smore newsletters to spread the word online.