Judith is using Smore newsletters to spread the word online.

Get email updates from Judith:

We're always up to something. Here are the stories.

We're always up to something. Here are the stories. 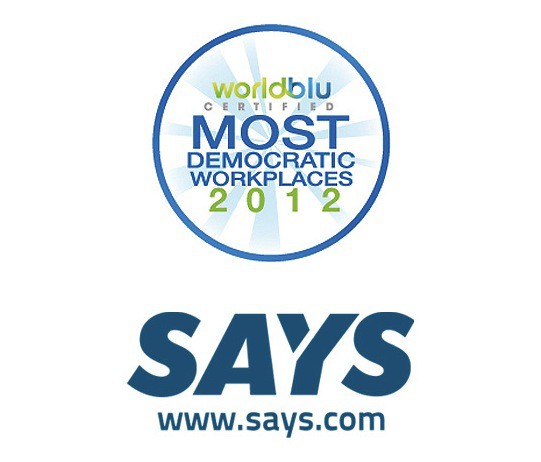 SAYS is certified as one of the world's most democratic workplaces, as ranked on WorldBlu List of Most Democratic Workplaces™ 2012

SAYS puts Malaysia on the map and joins the ranks of other notable companies such as Zappos.com, Namaste Solar and Menlo Innovations in the WorldBlu List of Most Democratic Workplaces™ 2012, joining 39 other companies around the globe. The organizations range in size from five to 90,000 employees, representing over $17 billion in combined annual revenue.

This is the most global WorldBlu List to date, indicating a global movement towards democracy in the workplace.

Companies become eligible for a spot on the WorldBlu List of Most Democratic Workplaces™ only after its employees complete the WorldBlu Scorecard™, an assessment evaluating their organization’s practice of the WorldBlu 10 Principles of Organizational Democracy™, with an overall combined score of 3.5/5 or higher. The WorldBlu Scorecard™ was developed based on a decade of research into what makes a world-class democratic company. Organizations from the for-profit and non-profit sectors that have been in operation for at least one full year and have five or more employees can apply for WorldBlu certification.

WorldBlu-certified organizations make use of a variety of unique practices that are distinctly democratic, give power to their people, and contribute to profitability, high performance and employee engagement.

Khailee Ng, CEO and co-founder of SAYS shares openly about the work culture at SAYS, how it's practiced, and why it's the backbone of the company.

Interview with Khailee Ng of SAYS (1/5): Why democracy at the workplace?

Q: A democratic workplace attracts top Gen Y talent and grows the bottom-line. Does it mean that there is no place for Gen X in that team?

Khailee (CEO, Co-Founder of SAYS): Oh man, the Gen-Y label again. Eew. I got to get my press people to stop using that word LOL. You'll find people of every age wanting freedom and choice at work. People at any age may be more 'new' vs 'old'. Young people can sometimes be very conventional as well. Boils down to what people value. And broadly speaking, people who are in this generation of workforce value freedom and choice at work, because that's what we value in life.

Most individuals who are smart and motivated flourish with freedom and choice at work. Young and old. However, it's been observed that young and smart teams function REALLY well with freedom and choice. The world's fastest growing companies, like Groupon and Facebook know this, which is why they achieve things some other older companies cannot.

Q: A democratically managed workplace is about giving power to the people. How does one achieve that while imposing control and getting things done the right way?

If the 'big boss' always wants to have control and have things done his/her way, then forget it. If the 'big boss' trusts the people he/she hires, makes the mission and key results really clear, provides the right tools, incentives, support, and systems, you have a chance. The employees must also want to be empowered. They must want to prove they can deliver brilliant results. The whole process is a journey, a really rewarding one for your soul, and your bottomline.
Interview with Khailee Ng of SAYS (2/5): Has this democracy been abused?

Please tell us how organizational democracy has benefited your workplace’s bottom-line.

Interview with Khailee Ng of SAYS (3/5): How does this democracy benefit the workplace?

We have 2 stories about the impact one person can have, when given the freedom in the workplace to do the impossible. 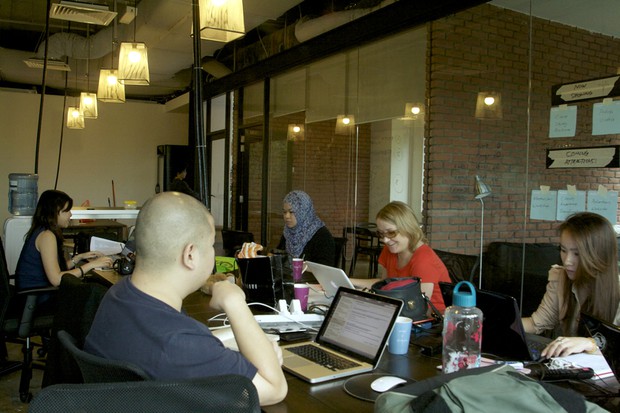 Q: What is your organization doing to promote or be a role model for organizational democracy with your clients and community?

HR leaders in the country have gathered in the office of SAYS.com (cheekily referred to as 'the Secret Hideout'). We’ve had the Head of HR from Astro and Maxis, two major media and telecommunications companies in Malaysia, and managing directors of our clients come over to gain insight to the SAYS.com work culture and the workspace. Leaders in SAYS.com have also been on numerous TV and radio appearances discussing “Gen-Y in the workplace” and related issues.

“You have to be at the Says office to know that they really mean what they say. The energy and enthusiasm is super high and has less of an office feel and more of a gathering of like minded friends. Hope they can keep this environment as they grow bigger."

"Blown away by their knowledge and mission, I left their office feeling super impressed and inspired."

"The SAYS.com office promotes the liberation of ideas and the imagination. There's a great sense of community & sharing - truly a workspace built by Gen Y's for Gen Y's."

Q: What are some of your best democratic practices at SAYS? Give us examples of how you practice organizational democracy.

Interview with Khailee Ng of SAYS (4/5): Example of A Culture Hack at SAYS (Smoke Signal)

Interview with Khailee Ng of SAYS (5/5): The Level Up Culture Hack at SAYS

Tell us about the In Your Face Lunch. How does it facilitate dialogue and listening?

The In Your Face Lunch is... not as intimidating as it sounds. Every month, each team engages in an open and candid dialogue about team progress, issues, ideas and individual feedback, with a strict format to ensure relevant matters rise to the top. 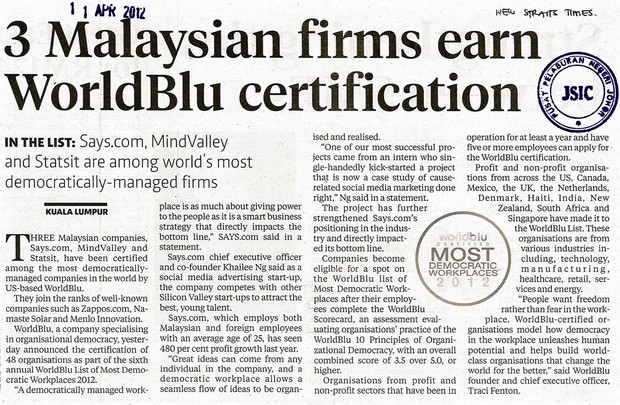 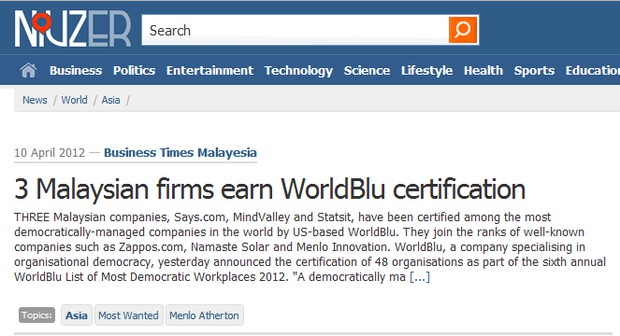 "WorldBlu, a company specializing in organizational democracy, has announced it has certified 48 organizations as part of the sixth annual WorldBlu List of Most Democratic Workplaces 2012, published annually on“Democracy in the Workplace Day."

THREE Malaysian companies, Says.com, MindValley and Statsit, have been certified among the most democratically-managed companies in the world by US-based WorldBlu. 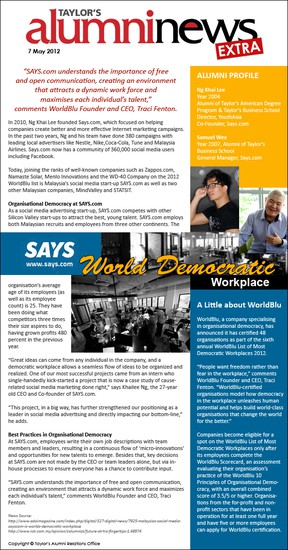 Judith is using Smore newsletters to spread the word online.

Follow Judith Yeoh
Contact Judith Yeoh
Embed code is for website/blog and not email. To embed your newsletter in a Mass Notification System, click HERE to see how or reach out to support@smore.com
close