All About Harper Lee!

Famed author Nelle Harper Lee was born on April 28, 1926, in Monroeville, Alabama. Lee is best known for writing the Pulitzer Prize-winning best-seller To Kill a Mockingbird (1960)—her one and only novel. The youngest of four children, she grew up as a tomboy in a small town. Her father was a lawyer, a member of the Alabama state legislature and also owned part of the local newspaper. For most of Lee's life, her mother suffered from mental illness, rarely leaving the house. It is believed that she may have had bipolar disorder.

One of her closest childhood friends was another writer-to-be, Truman Capote (then known as Truman Persons). Tougher than many of the boys, Lee often stepped up to serve as Truman's protector. Truman, who shared few interests with boys his age, was picked on for being a "sissy" and for the fancy clothes he wore. While the two friends were very different, they both shared in having difficult home lives. Truman was living with his mother's relatives in town after largely being abandoned by his own parents. It is said that the character of Dill was inspired by Truman Capote.

In July 1960, To Kill aMockingbird was published and picked up by the Book-of-the-Month Club and the Literary Guild. The following year, To Kill a Mockingbird won the prestigious Pulitzer Prize and several other literary awards. Horton Foote wrote a screenplay based on the book and used the same title for the 1962 film adaptation. Lee visited the set during filming and did a lot of interviews to support the film. Earning eight Academy Award nominations, the movie version of To Kill a Mockingbird won four awards, including Best Actor for Gregory Peck's portrayal of Atticus Finch. The character of Atticus is said to have been based on Lee's father.

*For more on Harper Lee or Truman Capote, click on the attached links below titled "biography". The first link is Harper Lee, the second is Capote.

*If you would like to listen to the score of the film To Kill a Mockingbird, that link is also below.

*Please check out what we've been working on by clicking the student work page!

* I've also attached the video to Harper Lee being praised as "Person of the Week". 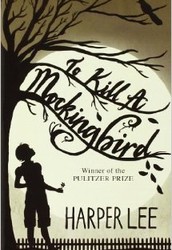 Book cover of To Kill a Mockingbird 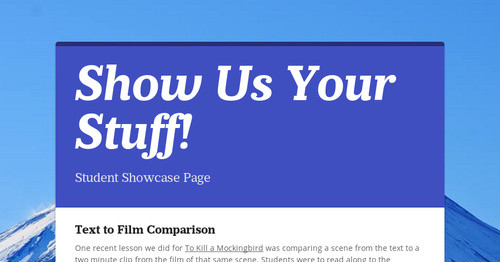 www.smore.com
Text to Film Comparison One recent lesson we did for To Kill a Mockingbird was comparing a scene from the text to a two minute clip from...