Get email updates from Kodi:

Two pharmacists from the United States have just made scientific history. On August 2, 2045, these two women discovered how to create nuclear fusion on Earth to use as an energy source. Nuclear fusion is the joining of two nuclear atoms. In nuclear warfare, we deal with nuclear fission (the separation of nuclear atoms), but the only place that nuclear fusion occurred before this discovery was in the core of the sun. 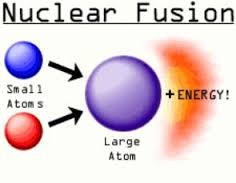 Nuclear Fusion creates energy by two atoms colliding and joining, a very explosive process that is only performed in the sun's core. The thing we confuse with nuclear fusion is nuclear fission. Nuclear fission is when atoms separate, creating explosions. This is the process used for nuclear warfare, to include nuclear bombs.

As with every nuclear based energy source, there's precautions and safety issues. When using this power source, the individual must be heavily educated on the subject and know what they're doing. A professional is strongly encouraged to only use the power. The power has a chance of causing radioactive explosions and disfunctioning, as any nuclear power would. Nuclear fusion is a dangerous process and is not recommended for public or private home use, unless run by a scientific professional.

With this new technology in our hands, we can save money on not using oil and natural gases in science inventories and factories. The energy rates will "explode" and we'll have longer-lasting energy sources that will emit cleaner air into our atmosphere.

Follow Kodi P
Contact Kodi P
Embed code is for website/blog and not email. To embed your newsletter in your email, click HERE to see how or reach out to support@smore.com