Get email updates from Maree:

Thank you once again for your patience and understanding in this every changing environment we find ourselves in, especially with the recent announcement to stay in Level 2 until September 6th. A Huge Thank you to all our Sponsors for your continued support of the Club.

Keep an eye out in supermarkets and book/magazine outlets for the next issue on the 7th September of the Rugby News as there is an article on Inglewood Rugby in here.

With both the Premier and Div 1 side finishing strongly to both secure Semi-Final spots against NPOB, with the Prem's at home and Div 1 away at NPOB, giving us another home game for the season with Div 2/3 at home as well on the 8th August. Unfortunately our Div 1 went down by 1 point, but the Prem's secured a place in the Final. It was encouraging to see a number of younger players from the Div 1 side making debut appearances for the Premier Team this season.

As you will be aware things changed quickly for the Finals Day that was to be held at the TET. The scene was set with the TET looking great due to the efforts of Cole and his TRFU team and Doc and his Team to prepare for a huge day in Inglewood. Game day came with No Spectators and supporters having to find any which way to watch the game via live stream or other creative ways. Although our Team didn't come out on the winning side of the scoreboard, they played with a great deal of heart and did themselves proud.

Although Rugby is done and dusted, Netball is moving into it's second round, with three games scheduled before the Semi-Finals/Finals for all 3 Premier Teams and with the recent announcement means No Crowds for two of these games, so hopefully by the 10th/11th September games can be played with spectators. Keep an eye out for the link which will be posted on our Facebook page or explore Netball Taranaki’s YouTube channel for the live stream of games for Premier Teams.

We wish all of our teams all the very best in the coming weeks in a very disjointed season, where momentum has been very stop/start this season and with the extra requirements at training's.

The premier team got through a patchy start to the shortened season to finish strongly, with their first grand final appearance since 2015.

Two strong wins to end the round robin and a superb semifinal victory over NPOB saw them take on a powerful Tukapa unit at TET Stadium. It was a final that will always be notable for being played with no spectators present due to COVID-19 alert level restrictions. While they came up short on the day, going down 33-29 in a high quality and toughly fought match, they threw everything into it and can be rightly proud of their efforts this season.

The team worked hard on their goals of growing proud Inglewood men, bringing pride to the club through their performances on and off the field and growing a culture where everything is for the team and the club and it was awesome to see that translate into a successful year. The team had a great camaraderie throughout the year and are hugely thankful for the support of the club and the community.

A huge well done and all the best to those players now moving into representative programmes: Crusader Faletagoai, Millennium Sanerivi, Jonty Ngatai-Powers, Rhodes Featherstone, Christian Faavae and Johnny Faletagoai-Malase, with Jack White playing in the pre-season game over the weekend. We know they will continue to represent Inglewood with pride. Also a huge congratulations to Brooke Harvey-Smith who played his 50th game for the Premier Team at the Finals.

Thank you to our Team Sponsor FBT, along with our many Jersey and Short sponsors.

Thoughts are now turning to summer, but it won’t be long at all before the coaching and management staff start planning for next season with a firm aim to go one better in 2021. #Upthemoa.

The Senior B’s gathered for the season post lockdown ready to release some energy and remove some unwanted extra gains achieved by a few.

Led by the inspirational Aaron Taylor and his administration executive Troy Chilcott, the team managed to sneak the win between Stratford/Eltham in the only warm up, dusting off the winning cobwebs for a few of the team.

The season started with an unfortunate loss to Southern but quickly got back on track with a win over Stratford in front of a decent home crowd.

A string of further wins throughout the season saw the team earn a semi final spot vs NPOB. Played in terrible conditions the team lost 13-12.

Seasons top try scorers were father and son combo of Mark Hale and Bradley Whitmore. The after match discussions of scrums and rucks over a couple of cruisers was a real highlight.

The future of the club looks positive with the youth and talent coming through.

Thanks to the committee and all other volunteers that helped make the season possible.

Thanks to our sponsors Central Roofing, Topp Construction & Taranaki Civil.

Firstly, A big thank you to Naki Plumbing our team sponsor, and all our other sponsors that got brought up at speeches if you brought the captain for the day a beer.

Thank you to the Committee for working along side us during a rather unusual season.

With Shimo, Gydey, Turbo and Neglect at the helm things were doomed from the start.

Preseason training saw numbers of over 20 people. Full team training on the first night is a rarity.

We started the season with a first up win over NPOB and then struggled to get the W until playing them again later in the season. Injuries and family commitments did play its toll on the team, but we still managed to front up week in, week out.

Some Highlights from the season

· We knocked out more people per game than they did of us.

· White Board sessions did work, as we played our best rugby when we had these.

· Father, Son and Uncle all on the pitch at the same time.

· We manage to get the refs to use all their card, RED, YELLOW, and BLUE throughout the season.

· The promotion of Open Side Flanker Timo to the Prem team

· Trying to make a Large jersey stretch into a 3XL

· Brick nearly got 100% for standing on our halfback in every game.

All being said and done it has been a blast with many of the boys already committed to coming back next year.

Thank you to Warwick Lahmert who took over this appointment due to Pablo unable to return this season. Warwick has been helping out the Ferdie Rugby in our area and visiting the schools around our district that he has been able to to due to some restrictions due to covid.

Dates to put on your calendar 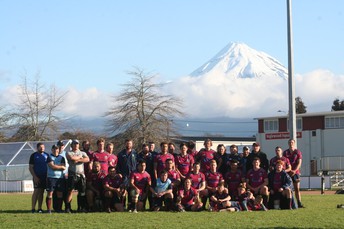 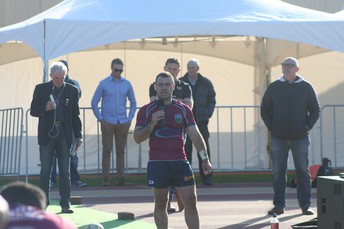 Speeches at end of Game 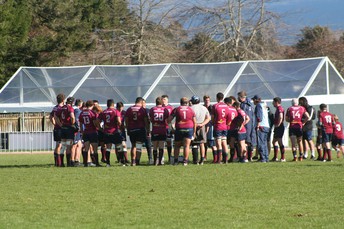