what I learned about idaho

what I learned about idaho

I found some interesting things about Idaho. In Idaho its against the law to give another person a box of candy weighing 50 pounds or more. Also, the largest man made geyser, in the world, is in Soda Springs. There are 72 types of precious and semi-precious stones, made in Idaho and they are the number one producer of potatoes, trout, Australian winter peas, and lintel.

The abbreviation for Idaho is ID. The largest city in Idaho is Boise, which is also the capital. The people of Idaho, are called Idahoan. Idahoans have a population, of 1,612, 136. 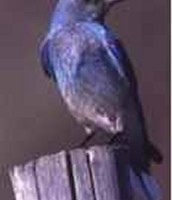 The mountain Bluebird, is the state bird of Idaho.

The tree of Idaho, is the Western White Pine.

The Syringa, is the beautiful state flower, of Idaho.

The State song is "Here we have idaho."

Esto Perpertua "Let it be perpetual" is the state motto. 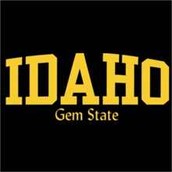 The state nickname is the Gem State.

A silk flag, blue shield, five feet six inches fly, four feet four inches on pike, bordered with gilt fringe two and one half inches width, with state seal of Idaho 21 inches in diameter, in colors, in the center of a blue field. The woman represents liberty, justice, and equality. The man is the miner. The pictures on the sheild represent the ma industries of the forestry, farming and mining. The cornucopia or horn of plenty symbols of abundance. The elks head represents wildlife. Esto perpetual (let it be perpetual). The words "State of Idaho" are embroidered in with block letters, two inches in hieght on a red band three inches in width by 29 inches in length, the band being in gold and placed about eight in a half inches from the lower border off fringe and parallel with the same. 1907 the flag was adopted. 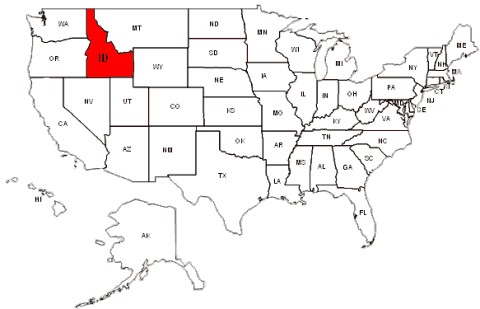 Congress created Idaho territory in 1863. It sprawled across an area 1/4 larger than Texas. Today, Idaho is smaller but still as big as six New England states combined with New Jersey, Matyland, and Delaware. So to travel from Bonners ferry in the north to Montpelier in the southeast encompasses a trip of 800 miles, only little less than traveling from New York City to Chicago.

1839: Henry Spalding begins printing Bible in Lapwai on earliest printing press in Pacific Northwest. August 12, 1805: Meriwether Lewis and an advanced party of the Corps of Discovery cross the continental divide at Lemhi Pass and Step into Idaho, last of 50 states to be entered by Euro-Americans. 1955: Arco becomes first communist in world to be lighted by nuclear power.

Joe Albertson: Founder of the Albertsons grocery store chain in 1939 and opened his own store in Boise, Idaho. He as born in Oklahoma and moved to Caldwell, Idaho, when he was three.

Cecil Andrus: Former Democratic Govern of Idaho and uS Secretary of the Interior. Served a combined 14 years as govern (1971-1977 and 1987-1995) longer than anyone in Idaho in history.

Ezra Taft Benson: Born in Whitney, Idaho. Later became 13th president of church of Jesus Christ of latter-Day Saints. Served as the US Secretary of agriculture for 8 years.

Things you can do.

Idaho falls, enjoy stage plays, live acts, and concerts. And take the little ones to get a closer look at animals and plants.

Museum of Idaho, you can look at all kinds of art.