Get email updates from Millie: 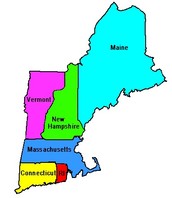 The New England Colonies was mostly focused on Massachusetts, New Hampshire, Connecticut and Rhode Island. The economy was mostly based off of home manufactures, small farming, sea trade and shipbuilding. The people quickly started to expand as the families grew and once immigrants started to settle in. These people tended to live up to 15-25 years longer than the British. They all had great education, they read the bible, they were also close-knit. If someone wanted to be able to vote they had to be a member in good standing of the church. They were able to quickly established a tradition of self-government, as the government increased they went hand in hand with increase resistance against British authority. In 1655 it was inspected that Mississippi were treating King Charles II rudely. By 1688 England replaced James II with the protestants William and Mary, the angry colonists forced the royal governor to return to England

This colonies included New York, New Jersey and later on Pennsylvania, in 166 England took away New York and New Jersey from the Dutch. In 1685 New York was made a royal province then in 1792 New Jersey was also made into a royal province. They were both under a royal government, and a general assembly. The colonies mostly relied on shipping, fur trading with the Native Americans, and grain production. Charles II granted the last unclaimed tract of land in America to William Penn who was a Quaker in 1681. He then launched a "holy experiment" based off on religious tolerance. Most Quakers would discriminate against the Americans and England based on religion beliefs and how they refused to bear arms. Pennsylvania later on became economically prosperous, by the 1750's Pennsylvania's capital had become the largest colonies, the population was of 20,000. 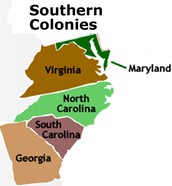 In these colonies Virginia dominated the Southern colonies, witch was Chesapeake colonies, Maryland, and the Carolinas. This region was more religious than the middle of New England colonies. They had a lot of immigrants that came from all over England, Roman Catholics, and a large amount of African slaves. Down in the south most families were smaller, this happened because men outnumbered women. Most men were needed to work in the region's plantations, which produced tobacco, rice, and indigo. Depending on the size of the plantations, it limited the development of the cities and merchant class, this brought wealth to New England. During the seventeenth century plantations drew many immigrants to the Chesapeake region through the institution of Indentured servitude. They were mostly white men who bound themselves to labor for a number of years until they were able to earn their freedom and a small plot of land. Even when they were free they struggled to survive, this caused a conflict between servants and powerful plantation owners. Nathaniel Bacon accused the royal governor of Virginia for failing to protect the less wealthy farmers from the Native American raids. Bacon led 300 farmers and attacked the Native Americans, he was then announced as a rebel. He lead his men to Jamestown were he demanded political reforms. He then suddenly died that year, the tension between rich and poor remained.

* In the Southern Colonies most of the people had to work in order to get their freedom, yet they still struggled once they were free.

* All three colonies were very religious

* Pennsylvania became the largest city of the colonies

* They all survived by trading different things, or by working in different places.

* Most people weren't able to survive in the Southern Colonies