Estelle is using Smore newsletters to spread the word online.

Get email updates from Estelle:

Here is an interesting article from Steve 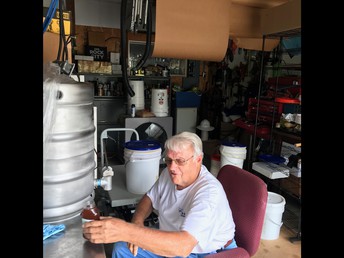 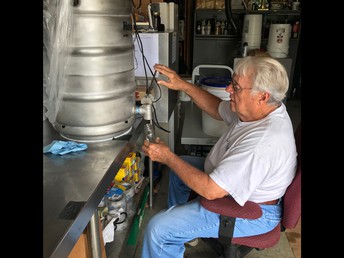 Got to get the orders ready. 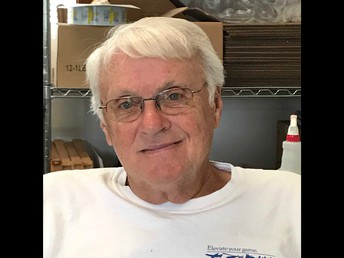 John in his office

This week I had the privilege of spending time with John Gardner on his bucolic acreage, Dayspring Farm just outside York. Born and raised in Montgomery Alabama, John met and married his sweetheart Sandra 60 years ago! John retired from Winn Dixie as the Director of Warehouses, in 2002. After spending many years traveling and moving for work, he settled in York.

He did the bee class and was hooked, he had three hives and sold all his honey! The next year he had 15 hives and quickly sold all of that honey. Through the years he has had anything from 3-48 hives. In recent years it has become challenging to maintain so many hives because of diseases and mite control. He buys and sells honey to to 5-6 stores.

In YCBA John has been an active board member serving in each role. He started the co-op at our club, it was a way to get the essential stuff beekeepers really need; at a discounted cost, close to where you live.

John says that bees are his daily proof of God-this insect flies 2-5 miles finds nectar and pollen returns to the hive and communicates the source to other bees, "they dance to share the wealth!" The bees sacrifice their lives for one goal; survival of the rest, they work themselves to death.

John and his family live a busy life on their farm they have chickens and muscadines and goats. At one time they even hand reared orphaned deer.They have two huge dogs to protect their livestock.

Here is a video of our hive in the spring.

The Buzz was all about Varroa.

Randy Oliver-you would not leave a mite problem unchecked on you puppy! You have a responsibility to other beekeepers to check and control mites, when you're in the market for a new queen, get one that's Varroa resistant. You can check our more on his website

Dr. Delaplane: Spoke about the origin of bees and how tied their growth and movements are to human migration. One study they conducted suggested that hives packed closely together were more likely to have mites than hives a 100 feet apart.

Dr. Jennifer Tsuruda: From Clemson Diseases spread just like flu or a cold, take notes about your hive, keep hives healthy, germs don't spread easily when bees are healthy. you can check out more on her webpage

We are looking for people to help mentor new beekeepers, and schools to promote diversity and develop a more successful experience for newbies. Please complete the form below, we will generate a master list to be shared with everybody.

Congratulations to Benny Copeland who was promoted to SC Director. At our next meeting we will be looking to fill the following board positions:

President and Vice President, we ask that you search your hearts and hopefully find time in your life to help the club out.

Estelle is using Smore newsletters to spread the word online.

Follow Estelle Prinsloo
Contact Estelle Prinsloo
Embed code is for website/blog and not email. To embed your newsletter in a Mass Notification System, click HERE to see how or reach out to support@smore.com
close