The Burning of Lawrence, Kansas

Border Ruffians are the cause of the attack

The Burning of Lawrence, Kansas

Border Ruffians are the cause of the attack

What was the Kansas-Nebraska Act? The Kansas-Nebraska Act was an act proposed by the Illinois Senator named Stephen Douglas. Stephen Douglas proposed this act to gain the support of the southern leaders, and wanted the railroad to go through Chicago, so it would benefit commerce in his home state of Illinois. He proposed the act with four main changes which were that Kansas and Nebraska were to become western territories, the formation of the Republican Party, and the Missouri Compromise to become repealed, which causes a massive race to settle into the state. These new changes cause Kansas and Nebraska to become organized into territories, the formation of the Republican Party, and “Bleeding Kansas”. Bleeding Kansas was the bloody race to settle Kansas into a state. An example of an event during “Bleeding Kansas” was when the Border Ruffians burned the town of Lawrence, Kansas. Throughout the next paragraph, I had recently interviewed a worker at the newspaper offices who experienced the event as it was happening. This man abandoned the town before it fell to the ground and escaped without any harm. So we decided to interview them about the surroundings while the attack was taking place. 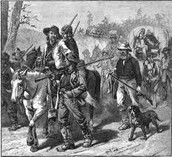 A group of Border Ruffians traveling along a pathway holding their rifles to prepare for fighting.

Another group of Border Ruffians who are also traveling with their weapons in case they need to use them.

This is the scene of Border Ruffians traveling in large groups with heavy amounts of military.

“It was the day of May 21, 1856 when I was printing the newspapers about the new Kansas-Nebraska Act and the construction of the Trans-Continental Railroad.” “When I saw a large amount of Border Ruffians (proslavery Missourians) walking down the road towards the town, holding weapons,” said the man. He shouted with a loud voice “Border Ruffians!, Border Ruffians!” The townspeople who were made up of free soilers, who were northerners against slavery and traveled down south to fight against it, fled. He made himself up a hill and watched as the newspaper offices and houses were being looted by the Border Ruffians, who the man said were supported by a proslavery marshal. We asked the man if he could describe what the scene around him looked like, and he said simply “No, that scene was indescribable”. He was able to tell us that he saw them stealing valuables and destroying everything that they could find. “I will never forget that sad day,” said the man. He said that he was still happy that no one was hurt in this day of violence. He told us that he was unsure what action he was going to do next, but told us that he will not stop fighting against slavery and southerners if that is what it takes.