I created this project because I wanted to take advantage of our class being able to create pretty much any shape of clay that we wanted with the coil technique, I wanted to create, not only for me to get an agreeable grade, something to prove to myself that I had artistic ability in myself. The problems that I faced was confidence, I did not really believe that I had enough creativity and skill to create an enticing artwork, therefore I felt like I should give up and not try. I fixed that by wanting to prove to myself that I had inventive capability. Other problems I faced was my clay was getting much too wet, so my whole artwork was falling apart. I had to set the inside of my piece on the base of a vase and I pressed on the sides to get the indention of certain places on the piece. I just let gravity take over, roughly 4 days later it was in the wavy shape that I had desired it to be in. If I could improve something about my composition I would of made the texture a bit cleaner. And after, I noticed that some glaze chipped off, so if I had more time I would have gone back and repainted it. Overall, I'm very pleased with how this came out.

I created this project because I thought it would be an interesting and peculiar idea to create an actual "mushroom bomb". The ones you see in mario kart. From a young age i spent much time playing mario kart and it was a big part of my childhood, I thought it would be a neat idea to bring it to life with a ceramics piece. The problems I faced was that one side would be very uneven with the other, i found it difficult to create a balance between how much to indent in to make the mushroom cap, i smoothed out both sides until both were equal in look and size. I also found that it had become much too thin of clay on the places in which I indented, I then had to go in and add more clay on the inside on certain areas that I found were not thick enough for use, consequently the clay, when being fired, exploded by an air bubble. This was even more perfect to the concept I was creating, an actual mushroom bomb that exploded. I feel that all of these aspects helped me really bring my piece to life. If I could I would have made the smiley face cleaner, and made the gills thicker. 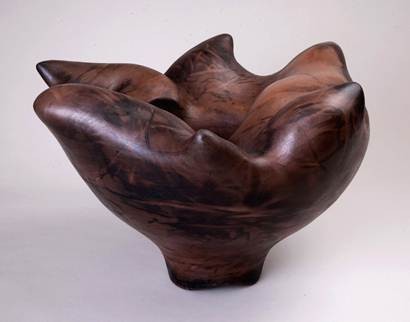 The shadow is toward the bottom of the artwork while the light shines on the wider top of the piece. It gives a wooden appearance though it is made of clay. You can see with the light hitting the top of the piece, and it has subtle swirls of different shades of brown, while the background in this piece is of dark brown. It has abstract flow where the cut off at the top is. The ends appear to be pulling into the center. All the colors that are incorporated in this piece that create a flow appearance and gives it value all together. This piece gives the allusion of a woody texture to it, and movement plays a big role in this piece with the way the swirls flow together for the wholeness of the artwork. This piece reminds me of the mind, how many aspects come to co-operate together to create a one functioning system, though its all a jumble of information that's always moving in velocity, yet how beautiful the mind really is, a flowing complex, powerful harmony, swaying of passion, and of a higher consciousnesses. I believe this is a successful artwork in my own opinion because of how many incorporation's of colors, and she used the title of her work "Vortex" to full meaning. She has the swirls of it flowing into the center like an actual vortex, but also one can interpret their own deeper meaning of it. 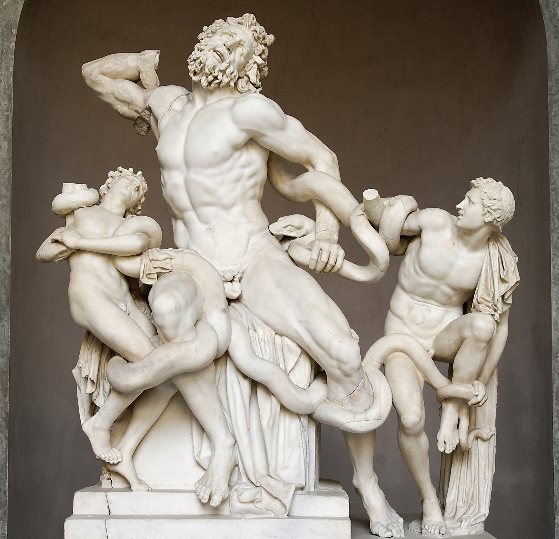 Laocoön and His Sons

A fully grown, very muscular man, and 2 younger men on either side of him, perhaps teen age. All painted a pale white. The men appear to be struggling to remove a snake wrapped on their bodies, the snake is going to bite the older, stronger man. They are all nude. Their facial expressions are of pain, and desperation. Texture, you can really see the curls in the men's hair. You can see the contrast and shade of the men's detailed body structure of their muscles, and abdominal's. The depth and value of the entire body very much creates a very vivid depiction of the scene. What first got my attention was the snake holding them and it seems that the snake is trying to suffocate the men, and trying to bite the larger man. I see snakes as symbolization of sin, and evil. What I think of when i view this craftsmanship as a religious piece. I feel that the snake is trying to pull them away from "goodness" and poisoning their minds with evil. As they fight to be released from the grip, they find it difficult to be free, such as in life where our "sinister" ways become challenging to overcome into pureness. The older man looks to the heavens and cries for help, such as when people pray for forgiveness, and strength to overcome difficulties in life. I believe this artwork is successful because of the depth, quality, and detail this artwork shows, when you view it there is a connection to a story, the artists purpose of the work. The inspiration, and I feel it has us really ponder on our own lives and goodness and evil.