Artist, Poet for the Common Man

Artist, Poet for the Common Man 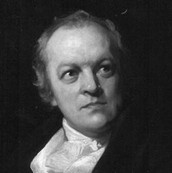 William Blake, one of the first great Romantic poets, left a legacy of poetry that reflected his deep religious beliefs and his liberal political and social ideas. Born in 1757 to middle-class parents, Blake did not attend school but learned to read and write at home. Before he began writing poetry, he took painting lessons and was later apprenticed to a printmaker. Over time, Blake has earned renown in both his art and poetry--in fact, his two most well-known books "Songs of Innocence" (1789) and "Songs of Expressions" (1794) were illuminated manuscripts, printed by copper plates and painted in watercolors. He was known for his "nonconformist" and "radical" views, and he wanted his poetry to be read and understood by the common people. Although he is known as one of poetry's greats today, he wasn't seen that way by most British during his lifetime. He died in "great poverty" in 1827. (Information from poets.org) 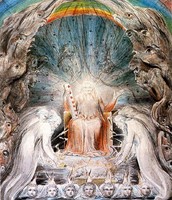 One of Blake's best-known poems, "The Lamb" exemplifies the simplicity of God in life and reflects Blake's own religious beliefs. Told in a childlike tone, "The Lamb" is written as a series of questions, where the speaker asks the lamb if it knows "what made thee." The poem alludes to Jesus Christ, who compares himself to a lamb, and tells the lamb that it is He that made thee. With its heavy use of repetition and rhyme (the poem follows an AABBCCDDAA scheme in both its stanzas), the poem like a nursery rhyme, its tone similar to a child talking to a lamb. With its simple word choice and rhyming scheme, Blake illustrates the gentle love that God has for his creation.

The Lamb by William Blake : The Poetry Foundation

A companion poem to "The Lamb", Blake's "The Tyger" forces the speaker to come to terms that the vicious tiger was created by God, just as the innocent lamb. Similar to "The Lamb", the speaker in "The Tyger" asks a series of questions; the difference is that instead of asking the tiger directly as the speaker did with the lamb, the speaker's focus is on why God would create this viciousness--and if God did "smile his work to see" the tiger he created. As opposed to the pure innocence of the imagery in "The Lamb," the imagery in this poem includes references to a hammer, an anvil, a furnace, and spears. The references to the furnace, fires, and burning also conjures the illusion of hell. The rhyme scheme is a basic AABB format, yet the dark imagery and more advanced vocabulary make the tone serious and more questioning of God's motives. When paired with "The Lamb," the two poems display both Blake's strong faith and his lingering questions about God.

The Tyger by William Blake : The Poetry Foundation

www.poetryfoundation.org
Tyger Tyger, burning bright, / In the forests of the night; / What immortal hand or eye, / Could frame thy fearful symmetry?

Born to middle-class parents, Blake felt a strong connection to those of the middle- or lower working classes, and that can be seen in "The Chimney Sweep." The poem is told from a young chimney sweep's point of view. The sweep tells of being sold by his father in the first stanza, but the majority of the poem describes a dream by fellow sweep Tom Dacre. Young Tom dreamt that an angel came down and released thousands of chimney sweeps from their black coffins. The angel also told Tom that if he worked hard was good, that he would enjoy life in heaven, which made Tom joyful and blithe the next morning, even though the weather was cold. Blake uses the colors of black and white to symbolize the hardships of earth versus the peace and life of heaven: "black coffins" versus "bright key," and the black soot versus Tom's white hair and the boys' bodies "naked and white." Yet knowing that Blake was seen as a liberal thinker, this poem likely hints at sarcasm, for he certainly wouldn't approve of young, underage boys being forced into the dangerous and sordid job of chimney sweeping. Blake likely used this sarcastic tone to share his disgust and attract attention to this disgraceful abuse of children.

The Chimney Sweeper: When my mother died I was very young by William Blake : The Poetry Foundation

www.poetryfoundation.org
When my mother died I was very young, / And my father sold me while yet my tongue / Could scarcely cry " 'weep! 'weep! 'weep! 'weep!" / So your chimneys I sweep & in soot I sleep. 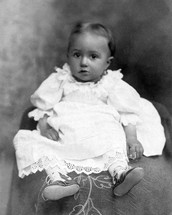 Many of William Blake's poems focused on the difficult living conditions of the working class--"Infant Sorrow" especially touches on the mixed feelings of bringing an innocent child into a difficult world. The birth of a child, which is normally a joyful moment, Blake transforms into an unfortunate occurrence. Using a negative tone with the words "groan(e)d," "wept," "dangerous," and "fiend," Blake illustrates the desperate and strained conditions of the working class and their difficulties of accepting another mouth to feed. In the second stanza, Blake also utilizes alliteration and parallelism with the -ing words of "struggling", "striving," and "swaddling," further emphasizing the struggles and the restrictions of the working class and how difficult it is to rise to a better social status.

www.poetryfoundation.org
My mother groand! my father wept. / Into the dangerous world I leapt: / Helpless, naked, piping loud; / Like a fiend hid in a cloud. 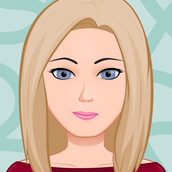