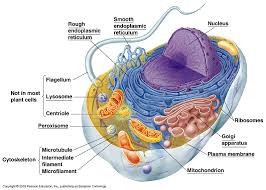 The organelles inside the animal cell work together to make the cell function as a whole. Many of the organelles function only when other parts are there or are the reason others can function at all. The cell is an interconnected system that relies on parts of itself to complete the tasks it needs to do. Without the relation of the organelles, the cell could not function like it does.

The organelles listed above show how either they help produce and transport items throughout the cell organelles or rely on other organelles to either function or produce what they need to help the cell.

Function of the Cell

All living things are composed of cells. The cell is a unit that all living things have, but cells differ from one to another. Organisms can be unicellular or multicellular, with multicellular (such as humans) being the most common.The functions of plant and animal cells are similar, but the structure of the two make them break off into two different categories. All cells are protected by a cell membrane, and even an additional cell wall, and have organelles that make up the cell's parts and functions. Organelles are needed to perform different tasks that keep the cell working and alive. The cell organelles function together as a unit and form tissue, muscles, organs, and systems. These cells carry out all the actions in coordination with the other cells and help the organism survive.The cell is a building block for all living things, and contain DNA information that combines with other cells to create the genes and DNA for the organism. Cells function in many ways, with creating DNA, forming tissue, carrying out specific functions (such as transporting organelles, providing energy, and more), undergo viruses and problems in the organism, and have varying life spans from one cell to the next. Each cell is different, but are all work together to help the system or organism function and survive.

The skin cell is a type of animal cell that has a main function of protecting and providing moisture to the internal parts of the body. Also, the skin cell is needed to protect the body from germs, which can cause sickness and even death to the organism. Skin cells, especially on the human body, are everywhere on the body and shed every day. The amount of skin cells on the body is impossible to comprehend, and rebuilds after it has been shed. The skin cell is essential in the protection of the body, and is a great example of how cells come together to form specific and important tasks in the organism.

Follow Kelly Cavan
Contact Kelly Cavan
Embed code is for website/blog and not email. To embed your newsletter in a Mass Notification System, click HERE to see how or reach out to support@smore.com
close