The God of Rain

The God of Rain

LaGodi was a very evil Sun God; he lived at the edge of the sun, where his majestic palace lay above diamonds. In the beginning, he had no sympathy for others. He was an old, selfish God. LaGodi heard people’s horrid cries, but had no leniency whatsoever. All he did was laugh. He laughed until his ego found it no more entertaining.

Boom! There it was. Like a bolt of lightning, killing animals and people suffering endlessly. Fields burned while villages fell apart. Meanwhile, LaGodi destroyed all creation on Earth.

Time passed, and as he continued to watch this live horror film play out before his eyes, seething with horrific visuals of suffering people, innocent animals, and no food or shelter, LaGodi realized what he was doing and how cruel it was. “I can’t watch these people go through this awful catastrophe any longer.” LaGodi said. He was beginning to feel compassion for these living beings. He saw how homeless and famished they were, and yet, he was living he life among beautiful and expensive things. He had no more cruelty left in him and he was drained of looking at this beautiful masterpiece form into dust every day to come.

LaGodi felt so awful, he cried. His cries were so powerful, it rained. It rained like it had never rained before. His tears restored fields and villages as people rejoiced in praise of mercy. “Oh LaGodi, what a remarkable God!” say the villagers. “Thank you, thank you our dear God!” LaGodi now feels so much better about himself and enjoyed the admiration he received from all these living beings. LaGodi has been called the God of Rain ever since his powerful tears produced this wet fluid. From there on out, every time LaGodi thinks about his awful doings, he cries and cries, his tears restoring and fulfilling all creation on Earth. 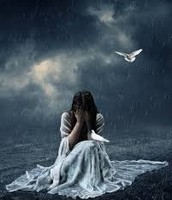 He cried and cried feeling awful for his doings. 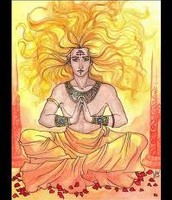 This was LaGodi before he transformed into he Rain God.

This was LaGodi's palace above the Earth.