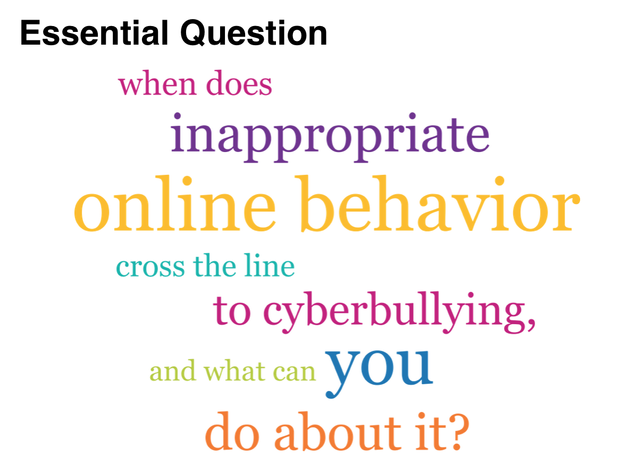 "People talk big when there's miles between you, but they might think more about what they say if they're right in front of you and can see your reaction. They could see how much it hurts someone."

harassing: bombarding someone with messages over digital media, or repeated contact when it is least expected

deceiving: using fake names, posing as someone else, or creating a fake profile about someone else

flaming: saying mean things, usually in ALL CAPS, and often in a public forum with the intention to humiliate

hate speech: a verbal attack targeting someone because of their race, gender, religion, ability, or sexual orientation”

CASE STUDY - Attacked From All Sides

“Eric gets a lot of pressure from his parents to do well in school. Other kids in school tease him because he works so hard but still gets poor test scores. He gets instant messages and text messages during the day and at night about his poor grades. The word “loser” is in most of them, and the language becomes stronger every day. Today he received a text from a number he did not recognize, with a photo of his body with a turkey’s head. A thought bubble above the picture reads: “Why am I so STUPID? What a *!*#&** I am.” Eric thinks Alexis, the most popular girl in the eighth grade, is behind the message. ”

Teachers - When you discuss bullet point #4, have a student write the answers on your board, take a picture and email to feliciadavis@mgsd.k12.nc.us.