Get email updates from cole: 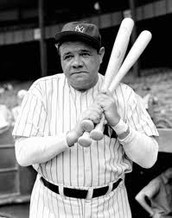 Baseball was fully ingrained in the American cultural experience by the start of the 1930s. Much of this was due to the home run slugging of Babe Ruth, who drew fans to the game because of his ability to hit the long ball.

Baseball's best overall team in the 1930s and 1940s. They won the 1932 World Series by sweeping the Chicago Cubs in four straight games. That victory featured Babe Ruth famously calling his shot when he pointed to the center field bleachers at Wrigley Field before bashing a long home run and then laughing at the beleaguered Cubs as he circled the bases. The Yankees won four straight World Series titles between 1936 and 1939.

Perhaps the two best of the era were Joe DiMaggio of the New York Yankees and Ted Williams of the Boston Red Sox. DiMaggio was a brilliant center fielder who was the game's best all-around player