Hoop, There It Is!

Hoop, There It Is! 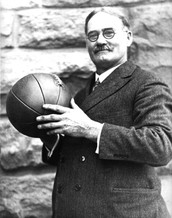 The Invention of the Game

Basketball was invented in 1891 by a high school teacher named James Naismith 13 original rules. The game was played with eight players on each team. The first goal ever scored in the history of basketball, was scored by William R. Chase. William made the first goal 15 minutes after James Naismith had introduced the game to his students.

The YMCA played a huge role in spreading the game throughout the world. In 1893, Melvin (Mel) Rideout arranged the first European match in Paris. At the same time, Bob Gailey China, Duncan Patton went to India, Genzabero Ishikawa went to Japan, and C. Hareek went to Persia. The First World War broke out in 1914, and the U.S. Army started fighting in Europe in 1917. During World war I, American Expeditionary Force brought basketball wherever they went. Together with the troops, there were hundreds of physical education teachers, who knew basketball quite well, and even James Naismith spent two years with YMCA in France, in that period. Not only did they bring basketball with them, but even the “modern” basketball, that is the game as it was played in the United States at that time.

Basketball today is very different than basketball was a century ago. Basketball has its own professional leagues across the world and kids everywhere have a dream to be in the NBA. Basketball has grown so much in popularity and is quickly becoming the most played sport in the world. I don't think anyone could predict the future correctly back when basketball was invented. Not even The Great James Naismith could have seen this coming. Basketball has really changed so many lives of people. The NBA has its own campaign called NBA Cares. NBA Cares has professional basketball players go around the country and the world to help people with their problems. As an example, last year some NBA players traveled to Oklahoma after a violent storm passed. They helped rebuild houses. It is amazing to think that such a sport would bring the world closer together. And to think it all started with just a ball and two fruit baskets.