Bronze weapons helped China because at the time there weren’t as powerful metals. Their swords wouldn’t break on contact as easily as the enemy's weapons. Because of the mastery of the bronze weapons. The Shang stayed in power for over 500 years!

Legalism, daoism, and confucianism , these philosophies, made China more powerful. Whether it was in a good way or bad. These philosophies helped control kingdoms harshly, and freely. People couldn’t rebel with these laws but a lot of the time they didn’t need too.

The great wall of China helped because nobody could get over the wall. Not horses not anything, nobody couldn’t break it down. Nomads couldn’t get inside with livestock. It kind of impact our world today because it leaves a mark on the dynasty. It is also a great touring place to go. People can walk up and down the wall, it is cool to see what some of the slaves and workers had to go through.

Standardizing money, weights, language and lot more helped with trading in the ancient times, so more people could trade easier. It also brought China together or it United China. It allowed for easier trading. There were more fair ways to share a good amount of selling goods or buying them. 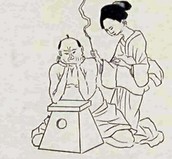 The Chinese learned about a medicine called moxibustion and how the human body works. What they believed as well is the yin and yang of the bodies. Whenever you were sick they believed there may be too much yin or yang. So they invented the acupuncture medicine. Some of the medicines invented from China are still used today.

They used the compass for hunting, trading long distances and more. We still use this today and it helps us find direction such as North and South much easier. The Chinese used the directions of the compass for their temples. They believed they should all be in the correct position for good luck.

Calligraphy was an art form that was important for Chinese history. It allowed for characters to be created in one or more strokes with a brush and ink. The strokes were made both delicate and bold at the same time. The paper was great for this type of art because it absorbs the ink very well.

Paper absorbed the ink of calligraphy much better than silk and bamboo. Paper was cheap to make. The ink was also much cheaper. This still impacts people today, we have used paper for thousands of years and still do today.