Get email updates from McKenzie:

Everyday, hundreds of polar bears die from lack of energy from having to swim so far to find ice to sleep and hunt on. With lack of ice to find food, pregnant female polar bears have had to fast for up to 240 days over the summer. There are many ways that you can help the polar bears, you just need to know how. (Polar Bear, 2012)

A mother and a cub

A polar bear stuck on a chunk of ice

A mother and cub stranded on a melting chunk of ice

The population of the polar bears is at 25,000 (in 2008) and isn't in immediate danger of going extinct. Polar bears are having to fast, or not eat, for up to 180 days over the summer because there is no ice for them to hunt on. The bears are becoming skinnier and are having fewer cubs causing the population to go down. Mother bears can't take care of their cubs and then the babies die leaving the mothers to grow old and die without any one to replace them.
(Polar Bear,2012)

Tourists have threatened the habitats of polar bears and the other animals that live in the area. The guides were bringing too many people to the area and were scaring the animals into a smaller habitat that was already too small. In 2009, the Antarctic Treaty limited the size and number of yearly visits with tourists to the Arctic. (Jones, 2010)

When the melting patterns change, it puts the polar bears and it's prey into a smaller area. In Hudson Bay, the ice doesn't last and then there is no food for the polar bears because there food is in the ocean and they are stuck on land. Broken ice is used by the polar bears to travel and hunt, so no ice means no food. (Polar Bears, 2012) 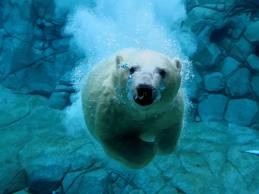 How Can You Help?

You can help the polar bears by trying to help their habitat. This means that you have to try to stop global warming. The things that you can do is; walk or ride you bike, use public transportation, avoid drive thru's were your car is in idle and keep your car tuned up. One of the more simple ways to help is to plant a tree. (Polar Bear International, 2012)