Get email updates from jackson: 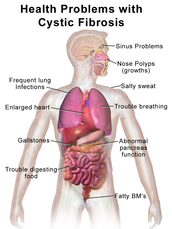 What is Cystic Fibrosis?

Cystic Fibrosis is a genetic disorder that mainly affects the lungs, pancreas, liver, kidneys, and intestines. side effects include difficult breathing, coughing up sputum, sinus infections, and poor growth.

What do mutations have to do with Cystic Fibrosis?

to find out if you have CF then you have to take a sweat test and have genetic testing done. to get CF then you have mutations in both copies of the CFTR gene. the gene is in control of sweat, digestive fluids and mucus. 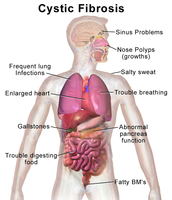 Can you get rid of it?

Cystic Fibrosis can not be cured. it is a disease in the dna. you can take medicine to make it better but you will still have it.

Cystic fibrosis is a terrible disease and it can make your life hard, But keep one thing in mind, no matter how hard life is, you still must stand against the disease. someday they will find a cure for it, but until then you are going to have a rough ride.

Follow jackson boyd
Contact jackson boyd
Embed code is for website/blog and not email. To embed your newsletter in a Mass Notification System, click HERE to see how or reach out to support@smore.com