James Buchanan was born near Mercersburg, Pa. He graduated from Dickinson College where he studied law. Shortly after he became a lawyer in Lancaster. During his engagement his fiance unfortunately died, leaving him the only president to never marry when he was elected. However his political career started at a young age of 23. 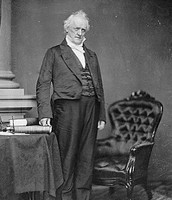 He was born in a log cabin around Mercersberg Academy. James Buchanan High School is named after him.