Cecelia is using Smore newsletters to spread the word online.

Get email updates from Cecelia:

By Breanna, Cece, and Andrew

By Breanna, Cece, and Andrew

A traumatic brain injury is caused by a bump, blow, or jolt to the head or a penetrating head injury that disrupts the normal function of the brain. 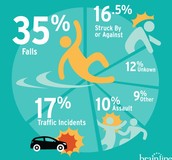 In the U.S., an estimated 1.7 million people sustain a traumatic brain injury (TBI) each year.

Leading causes include falls, traffic accidents, assault, and being struck by or against an object — such as another person, a wall, or a falling object. The Centers for Disease Control and Prevention report that there are:

Cecelia is using Smore newsletters to spread the word online.