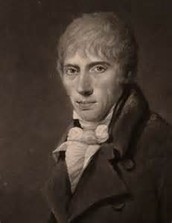 Who was John McAdam?

John McAdam was born in Ayr, Scotland, on September 21, 1756. It has been noted that McAdam traveled to the United States at 14 to live with his uncle after his father's death. Here he worked with his uncle at his counting house. When McAdam grew older he decided to return to Scotland, and with his return he began to experiment with road building. It is during this time that his experiments lead to the invention of "macadamizaton" and essentially, macadam. Invented around 1820, macadam, according to Britannica.com, is "composed of a compacted subgrade of crushed granite or greenstone designed to support the load, covered by a surface of light stone to absorb wear and tear and shed water to the drainage ditches." McAdam's invention instantly became popular for it improved the travel by road in the United States greatly. Following this invention, John McAdam died a few years later on November 26, 1836.

By the 1800's, many settlers were moving west and by 1811, 2 million of the 10 million people who were living in the United States lived west of the Appalachian Mountains. Since the travel West was long and hard, it was decided that the United States needed better roads for settlers to travel on. The solution was turnpikes, or toll roads. These roads were built by private stock companies and as people traveled on these roads, they had to pay a fee in order to continue traveling. Turnpikes got merchants attention and during 1800 to 1830 turnpike companies accounted for nearly half of all Pennsylvania's businesses even though many did not make a profit. The money that was collected from travel was used to improve the turnpikes so travelers didn't have to travel on a muddy ground. Therefore, the expenses overpowered any profit that was to be earned. In a turnpikes early stages, the improvements were made with logs that were placed side by side on the ground. Fortunately, a greater invention was made by John McAdam around 1820. He invented macadam. A step above dirt, macadam was put down on the roads to create a smoother, faster, and less muddier travel. Which, in the end, promoted movement and trade, making the benefits of a turnpike greater for the close merchants like farmers, or residents with private businesses. 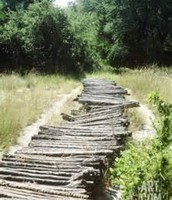 The looks of a turnpike in the 1800's so the road used for travel would be less of a muddy mess.

This is a picture of a turnpike in the completion process.