Harlem is using Smore newsletters to spread the word online.

Get email updates from Harlem:

The constitution puts the president in charge of the armed forces of the United States. However, it does not include details about powers given in this role of how vague some presidents say they possess all control to when needed to defend a nation. This power also extends to internal conflicts such as riots and natural disasters where order is needed.

Congress puts a limitation on the President's power since they provide funds to the military and still reserve the power to declare war.

The president is a "civilian" and not an active member of the military, but as Commander in Chief, he is responsible for key military decisions and to define military policy/strategy.

The president directs the foreign policy of the US and makes key decisions about our relations with other countries. Though this rule is limited by the Congress, the president can negotiate and sign treaties, sign executive agreements with foreign heads of state, and recognize foreign governments. The Senate takes its responsibilities with the checks and balances and foreign affairs very seriously. They can refuse the President's treaties and deny funds for foreign policy initiatives.

The president, however, has authority to make executive agreements with foreign countries without the Senate's consent.

Also as Chief Diplomat, the president can decide to recognize the legal existence of foreign country's government.

While the president has other serious roles, he also is a ceremonial figure representing the United States. Many other countries separate the duties of Head of State and Chief Executive, but the president does both. The president serves as a symbol or comfort for the United States for example, when a natural disaster or tragedy strikes, he is expected to comfort those who are affected. He also does more public events to celebrate America such as lighting the Christmas Tree, throwing the first pitch of the baseball season, and distinguishing athletes, actors, and artists.

As the Chief Executive, the president leads the executive branch of government that carries out the laws that Congress passes and runs the programs Congress create. He is in charge of a great range of laws and programs that affect the public and in charge of more than two-million government employees.

The President's executive power is given by the constitution, but once again is very vague. He has the power to appoint people to carry out important task, issues executive orders that force a law without Congress, impound funds that Congress approved, and grants reprieves and pardons for federal crimes.

The President's role as Economic Planner was not set in the Constitution but instead developed over time. In 1946, Congress passed the employment act which directed the president to submit an annual economic report to congress. Since then, laws have continued to pass that give presidents the power to deal with economic issues.

One the President's economic duties is to prepare an annual budget and his decisions reflect the President's priorities. The annual budget proposal is submitted to the House of Representatives and Congress ultimately passes a law that creates the budget that the president can either sign or veto. 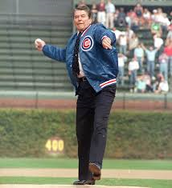 Harlem is using Smore newsletters to spread the word online.