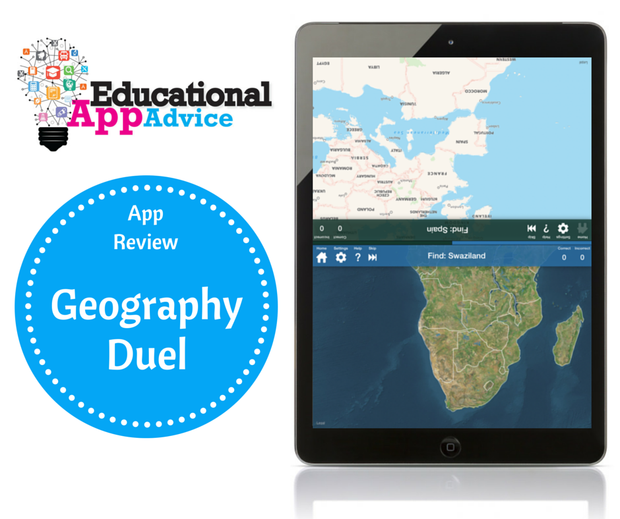 Geography Duel is a split screen trivia game that pits two players against each other to see who has the best geographical knowledge. It is made by Ellie’s Games, the developer of the popular app Math Duel.

In Geography Duel players sit at opposite ends of the iPad and have to answer map based questions in the quickest time possible. There are three modes of play – states, capitals and countries. The first two will be most applicable to American users as they are comprised of US states and capital cities. The third mode, however, gets players to locate countries from around the world. A task that is actually much harder than you think. Yes, we all know where to find countries like Australia, Canada and Russia but would you be able to locate Burundi, Tajikistan or the Cook Islands on a map?

Geography Duel contains many of the same features that made Math Duel such a success. For example, the settings for each player can be adjusted to create a level playing field. Geography Duel also has a single player mode that enables users to practice their geographical knowledge without the pressure of competing against someone else.

There are four map types to choose from. They are as follows:

· Earth - a satellite view of the world

· Standard – a map view of the world with country names included

Obviously, “Standard” view with the information already on the map is the easiest one to use whereas “Earth” with just a feint white line to even indicate that there is a border between countries is probably the most difficult. By choosing these different map views it is possible for a younger and older child to have a genuinely competitive game of Geography Duel.

Geography Duel is ad free and there are no in-app purchases. There is an external link to other apps by Ellie’s games but this is protected by a parental gate.

Facebook @edappadvice
Educational App Advice has been set up by educational psychologist Peter Maxwell to assist parents and teachers find great apps to use with their children.
petermaxwell@mail.com