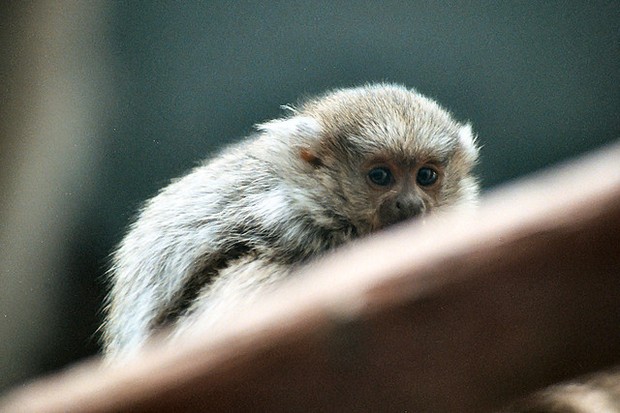 The San Martin Titi Monkey is a tiny animal who has light brown agouti fur covering the majority of its body. It also has slightly orange fur on its belly, chest, and inner limbs. There are also dark patches around its eyes. These miniature creatures have very compact bodies with male bodies growing from 30-30.6 cm long and female bodies that grow from 31.3-38.5 cm long. The tail can grow longer than both the male and the female bodies with a range of 36.9-40 cm. The average weight of these monkeys is about 1.2 kg.(Ark)

The San Martin Titi Monkey is threatened by the loss of habitat. Due to de-forestation because humans need more land space, the species is critically endangered. There are few conservation acts in Northern South America although there are still a couple like the Bosque de Protección de Alto Mayo (Protection of the Forest of Alto Mayo) are still trying to protect it.(Ark)

Many humans just like us are cutting down their habitats and slaughtering them for the meat.(Ark)

It mainly eats fruits but also eats young seeds, flowers and non-reproductive plant parts such as leaves, shoots and tendrils.(Ark)

The San Martin Titi Monkey eats a large amount of bugs even when compared to others of its kind.(Ark)

The San Martin Titi Monkey has been recorded in a wide variety of forest habitats deep in north-central Peru. Places like secondary forests, bamboo stands, fruit crops, vine thickets and palm-dominated forest are populated by many of them. It appears most often around near streams and rivers, often occurring in flooded and seasonally flooded forests. It's also been said to be sighted in drier areas.(Ark)

The San Martin Titi Monkey lives in tight family groups, to both move faster, and quieter. They use their non-prehensile tails to balance themselves as they climb across the trees.(Ark)
Alvarito & Cooper, our titi monkeys