It all begins in 1914, after the Archduke Franz Ferdinand was assassinated by a Serbian nationalist. WWI took up to four years to end. Many men died from being sick or getting shot. It finally ended in 1919.

Dogs in WWI were trained not to bark upon locating a wounded soldier, but to bring back a swatch of uniform to their kennel where surgeons would follow the animal back to the soldier with a stretcher. In case of enemy fire making this trek too dangerous, the dog would drag the soldier to saftey.

Starting on Christmas Eve, many German and British troops sang Christmas carols to each other across the lines, and at certain points the Allied soldiers even heard brass bans joining the Germans in their joyous singing.

At the first light of dawn on Christmas Day, some German soldiers would come out of their trenches and approached the Allied lines across no-man’s-land, calling out “Merry Christmas”. At first, the Allied soldiers feared it was a trick, but seeing the Germans unarmed they climbed out of their trenches and shook hands with the enemy soldiers. The men gave each other presents. There was even a documented case of soldiers from opposing sides playing a good game of soccer.
During World War I, the soldiers on the Western Front did not expect to celebrate on the battlefield, but even a world was could not destroy the Christmas Spirit. After all that hard fighting and all the hard work put into fighting in the war, the war ended in 1919. 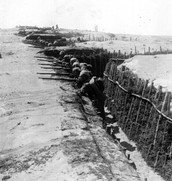