Turner is using Smore newsletters to spread the word online.

Get email updates from Turner:

"Children should write from experience, from what they know, from what they see around them. A bug, a tree, a piece of fruit, a star, moon, sunset, seeds. Any subject is a topic for poetry." - Lee Bennett Hopkins 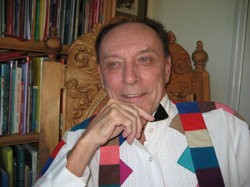 Lee Bennett Hopkins was born in Scranton, Pennsylvania in 1938. Around age 10, he and his family moved to Newark, New Jersey. Because his family did not have a lot of money, he had to miss many days of school to help his family financially. This was especially true when his father left his family around age 14. Hopkins had a teacher, Mrs. McLaughlin, who had a major influence on him and redirected his life goals. Mrs. McLaughlin introduced him to theatre and reading. Hopkins decided he wanted to become a teacher so he attended Newark State Teacher’s College. After graduation, Hopkins taught 6th grade for three years in Fair Lawn, NJ. While he was teaching 6th grade for these three years, he became the resource teacher and compiled sources for other teachers to use. Prior to receiving his masters at Bank Street College of Education in NYC, Hopkins taught public school from 1960-1966. In 1966 he became a consultant for Bank Street where he used poetry as an aid to learning. He worked for Bank Street until 1968 when he worked for Scholastic Magazines, Inc. in New York, as a curriculum and editorial specialist.

In 1976 Hopkins began working as a host and consultant to children’s television series Zebra Wings, Agency for Instructional Television. He has been a national trustee for National Center for Children’s Illustrated Literature since 1991. Hopkins won Florida Lifetime Achievement Award in 2010. Hopkins has declared himself a full-time writer since 1976.

Why He's Such an Interesting Guy

- Guinness World Records- July 2011- most “prolific anthologist of poetry for children” with 113 titles.

-When Hopkins was a child, had to sneak in to theaters at intermission because his family did not have enough money to pay for a ticket.

Awards He has Recieved and Established

- NCTE Award for Excellence in Poetry for Children- 2009

- 1989 Pennsylvania Author of the Year award

Books he has Written

Turner is using Smore newsletters to spread the word online.