Ir is using Smore newsletters to spread the word online.

Get email updates from Ir:

The head and body of a full-sized adult wombat is about 100 cm (40 inches), with a tail of 50 cm (2 inches). They can weigh from 25 to 40 kg (55 to 88 pounds), long claws and short legs for burrowing, it's the the largest burrowing herbivore in the world. The Northern hairy nosed wombat have a body that's covered in soft grey fur including its nose, and it is similar to the other two species, but has a wider, flattened, longer muzzle, more pointed ears, and they also tend to have dark patches around their eyes.

the wombats habitat is flat, semi-arid grasslands or woodlands. They live in a harsh, hot climate which experiences frequent droughts, prefers deep sandy soils in which to dig their burrows. And they will sometimes share burrows with same-sex relatives. The northern hairy-nosed wombat is endangered and is one of the rarest animals in the world. There is currently only one small population of this species, near the greatest threat of extinction. The northern hairy-nosed wombat eat various grasses and are herbivorous, they eat two hours per night in the summer and six hours per night in the winter. Wombats also limit their water loss, so they can go for a long time without drinking water. They require less water than almost any other mammal.

because of human settlement. Agriculture and the destruction of the wombat's grassland habitat has caused the wombat to have to move to mountainous, unsettled areas where they are less able to dig effective burrows.

Wombats do not have many natural enemies. Dingoes are their primary predator, along with foxes, and Tasmanian devils.

The Northern Hairy-Nosed Wombat is endangered mostly because of lack of food. Stock animals (cattle and sheep) and the introduced rabbit have also degraded their natural food source, which is mostly grasses and shrubs.

The wombat have strong claws for digging burrows, and thick fur to keep them warm in the summer. The northern hairy nosed wombat's scientific name is Lasiorhinus Kerfftii. 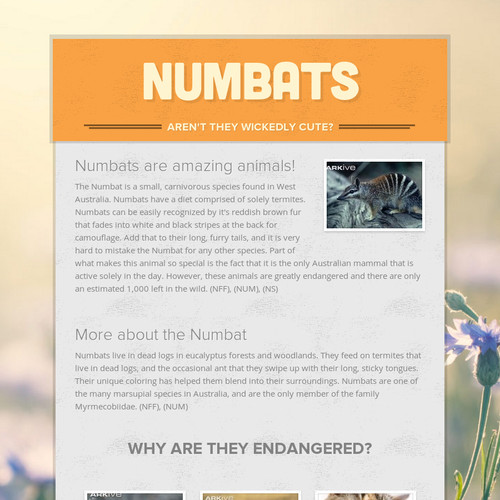 www.smore.com
The Numbat is a small, carnivorous species found in West Australia. Numbats have a diet comprised of solely termites. Numbats can be...

Ir is using Smore newsletters to spread the word online.

Follow Ir Ci
Contact Ir Ci
Embed code is for website/blog and not email. To embed your newsletter in a Mass Notification System, click HERE to see how or reach out to support@smore.com
close