Wrapping up the 2017-2019 Communities of Excellence Grant

The end of June marked the end of another successful iteration of the Communities of Excellence grant. The grant has supported the activities of the Tobacco Free Lancaster County Coalition since the early 2000s. During the last two years, July 2017 - June 2019, the grant allowed staff to support seven businesses and organizations in becoming tobacco free, including the University of Nebraska - Lincoln campuses. Staff also worked with residential property managers to increase the number of smoke-free rental units from 6,737 to 9,241. Finally, the grant supported the outreach and activities of six contracted program partners. Without the help and support of these partners, the TFLC would not be able to do its work with youth, minority populations, and other disparate groups disproportionately impacted by tobacco. We would like to thank, El Centro De Las Americas, the Salvation Army, the Boys and Girls Club, CHI Health Community Asthma Education Initiative, the Lincoln Police Department, and the Lancaster County Sheriff's Office, for the work they do to support tobacco control in Lincoln and Lancaster County. Thank you!

In June, Cassandra (Cassie) LeBlanc joined the tobacco prevention team as a health educator. She joins existing educators, Christina Hitz and Rebekah Willoughby, at the Health Department. Cassandra spent the last two years as a Peace Corps volunteer serving in

Albania. She is originally from Florida and holds a bachelor's and master's degree from the University of Central Florida. Cassandra will be leading the Business-School Task Force of the Tobacco Free Lancaster County Coalition and brings a fresh new perspective to tobacco control activities. Cassandra spends her free time avidly supporting the U.S. Women's Soccer team. 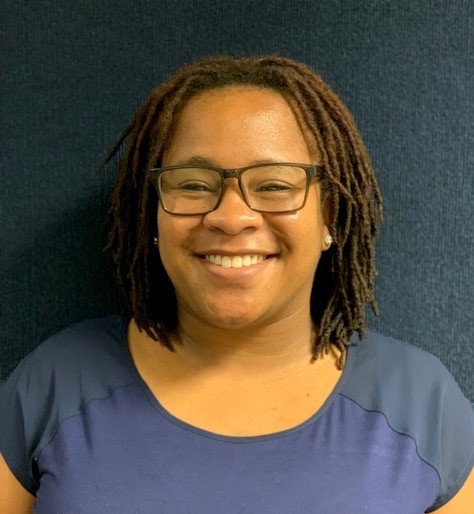 During the 2019 legislative session, the Nebraska Unicameral passed several tobacco control measures. First, was LB149, which raises the tobacco and vapor product purchase age to 19. In addition, it requires retailers selling electronic nicotine delivery systems (ENDS) to be licensed like other tobacco retailers. The bill does not preempt local municipalities from enacting stronger measures.

Next, LB294 appropriated $2.579 million in fiscal years 2019-2020 and 2020-2021 to fund Tobacco Free Nebraska, and by extension, the Lancaster County Tobacco Control Program. As such, we will be able to continue convening stakeholders to reduce tobacco use with our existing and new partners. New partners in July 2019 include the Ponca Tribe of Nebraska, the UNL LGBTQ+ Resource Center, Lincoln Public Schools, and the U.S. Army National Guard.

Finally, LB397 passed. This bill is similar to LB149 in that it replaces the term "vapor products" with "electronic nicotine delivery systems" (ENDS). The bill also requires licensing of retailers selling ENDS and makes changes regarding the qualified escrow funds to which qualified tobacco product manufacturers make contributions.

Each of these measures goes into effect January 1, 2020.

The five module presentation will be recorded and available for use by other youth service organizations for staff training. Please contact a tobacco health educator at (402) 441-4605 for more information! 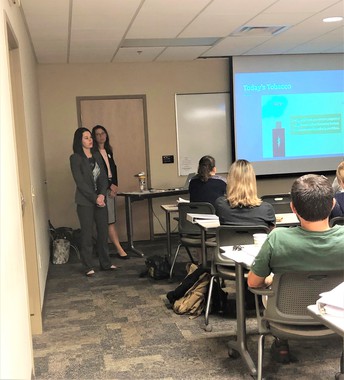 Christina and Rebekah presented July 10, 2019 at the School Community Intervention and Prevention training. 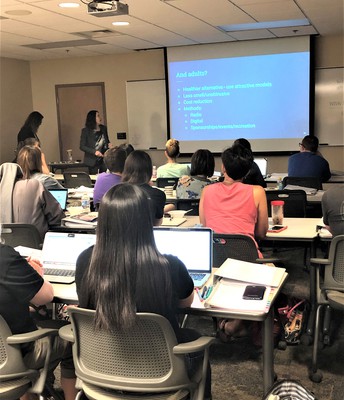 E-cigarette marketers use unsubstantiated claims to sell their products - including health and cessation benefits. The bottom line? These products are never safe for youth, pregnant women, or non-smokers. 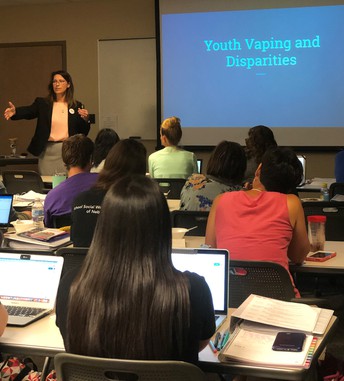 Christina shares how older youth and those who identify as LGBTQ+ are more likely to use e-cigarettes than their peers.

Recently retired LLCHD Health Educator, Renee Massie, received an award in recognition of her contributions and leadership in tobacco control for Lancaster County from the Psi Chi Omega Chapter of Alpha Kappa Alpha Sorority, Incorporated. She was honored at the Pink Goes Red for Women event held April 6, 2019. 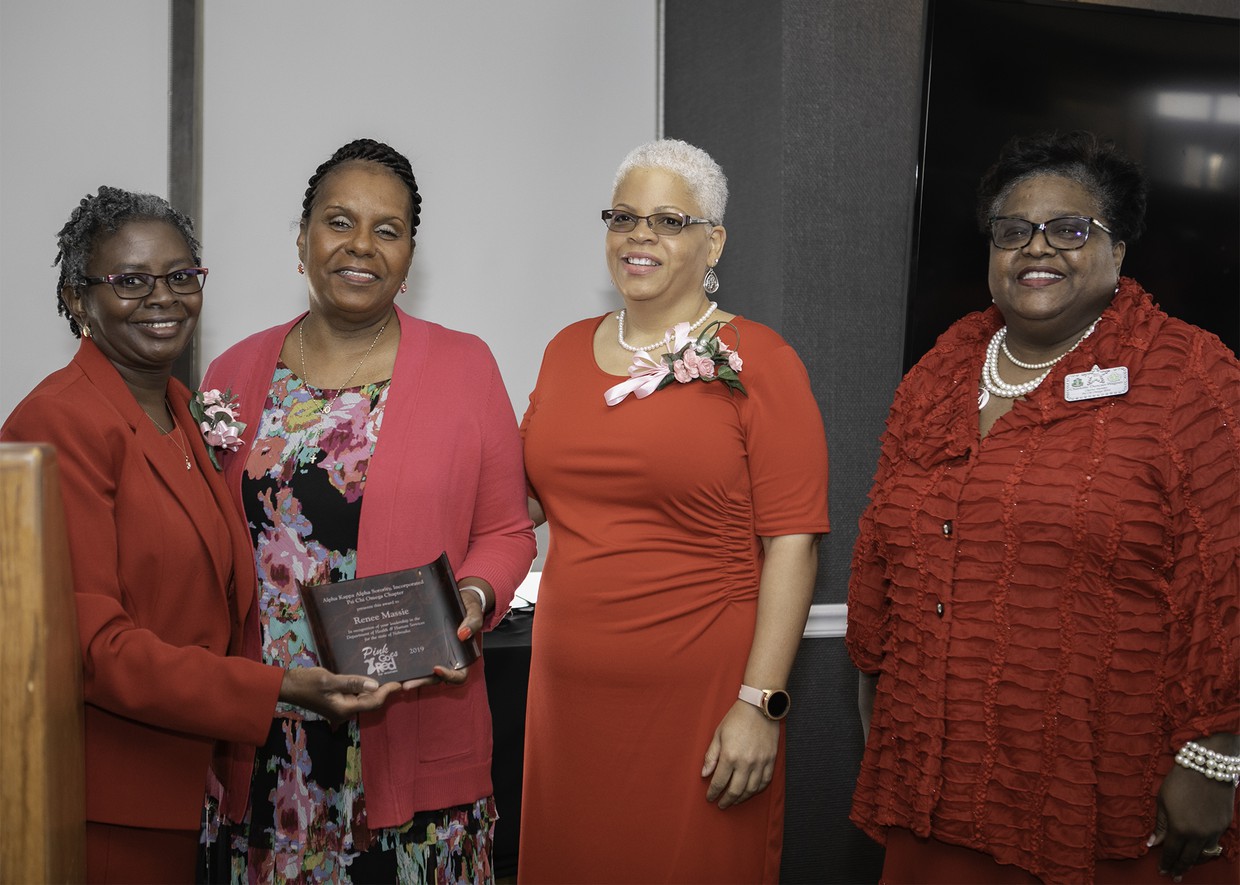 Youth from the Salvation Army celebrated World No Tobacco Day on May 31, 2019 by making posters with anti-tobacco slogans. 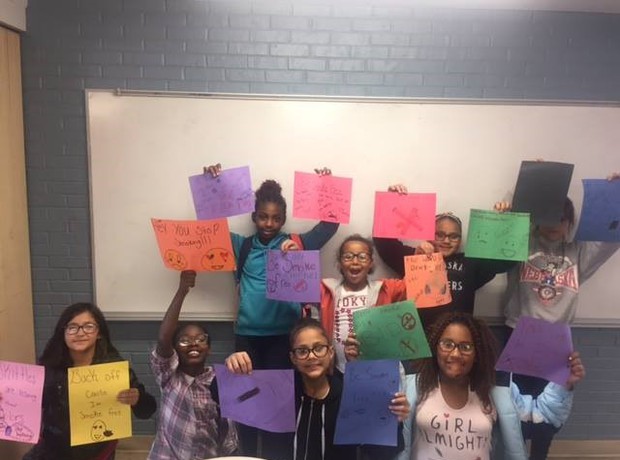 Join us at 9 a.m. in room 2135 on the second floor of the Health Department! We will be welcoming our new Chairperson, Tiffany Quicke, and updating coalition members on the activities of the sub-committees.
Get Directions
Funding provided by the Nebraska Department of Health and Human Services/Tobacco Free Nebraska Program as a result of the Tobacco Master Settlement Agreement.
Paste in your blog/website to embed.
Powered by Smore
Powered by Smore