Does Technology Rule the World?

The whole history of computing in one flyer.

Does Technology Rule the World?

The whole history of computing in one flyer.

Have you ever wondered who is behind the computing world? What about a world without computers? In this flyer you will find out what a Wan, Man and Lan are, who invented the internet and world wide web and also who invented the first computer. 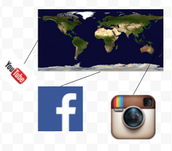 This is a diagram of the WAN network, although there are many more things that count as well.

What is the internet and who invented it?

Robert E. Kahn and Vint Cerf invented the internet in the late 1960s. The internet is a series of computers that are connected up with wires to convey messages. The first message was "LO" which was an attempt at writing "LOGIN". Unfortunately, in the middle of writing the word the computer crashed. The reason the internet was invented was so that universities could communicate about their findings and results.

What is and who invented the world wide web?

Robert Cailliau and Tim Berners-Lee invented the world wide web in 1989. The World wide Web is what you can actually see when you search something.