Pope Francis, born Jorge Mario Bergoglio, is the reigning pope of the Catholic Church. He is both the Bishop of Rome and sovereign over the Vatican City.

Bergoglio was born in Buenos Aires, Argentina, in 1936. Before begining seminary studies, he worked as a chemical technician and a nightclub bouncer. He was claimed a Catholic Priest in 1969, and from 1973 to 1979 he was Argentina's Provincial Superior of the Society of Jesus. He became the Archbishop of Buenos Aires in 1998, and he was made a cardinal by Pope John Paul II, in 2001.

After Pope Benedict XVI resigned in 2013, a papal conclave elected Bergoglio as his successor a month later. He chose Francis as his papal name in honor of Saint Francis of Assisi.

Pope Francis has a motto, Miserando atque eligendo, which means through the eyes of mercy and chose him. His motto is a reference for when he found his vocation, age 17, to priesthood. He started a day of celebrations by going to confession. Most say that Pope Francis is known for his humility, concern for the poor, beliefs and faith. As a cardinal, he opposes same-sex marriage. He maintains the Church teachings against homosexuality, but he has stated that gay people should not be treated insignificantly. Regarding loyalty to Church doctrine, he has spoken against abortion as "horrific". He says that women should be valued, not clericalized. The Pope has also announced a zero tolerance policy towards sex abuse, saying that sex abuse was as bad as performing a satanic mass. He is commited to respectful interfaith dialogue as a way for all parties to learn from eachother. Bergogolio is also recognized for his efforts "to further close the nearly 1,000-year estrangement with the Orthodox Churches." Pope Francis is very opinionated and true to his morals that originate from his studies. Pope Francis is outspoken and not ashamed of what he belives in. 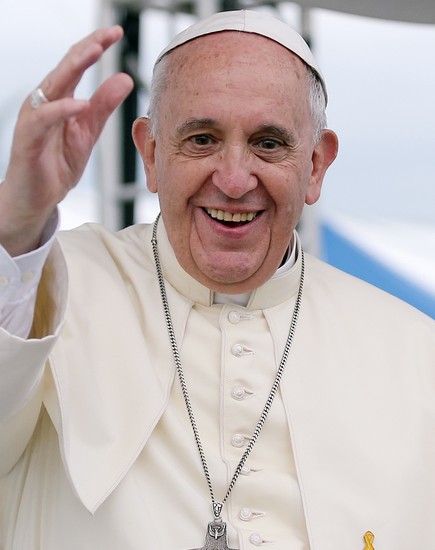 Archbishop- the chief bishop responsible for an archdiocese.

Bishop- a senior member of the Christian clergy, typically in charge of a diocese and empowered to confer holy orders.

Cardinal- a leading dignitary of the Roman Catholic Church

Clericalism- the application of the formal, church-based, leadership or opinion of ordained clergy in matters of either the church or broader political and sociocultural import.

Nightclub Bouncer- a type of security guard, employed at venues such as bars, nightclub, or concerts to provide security.

Priest- an ordained minister of the Catholic, Orthodox, or Anglican Church having the authority to perform certain rites and administer certain sacraments.

Society of Jesus- a Christian male religious congregation of the Catholic Church.