A Dark Witty and Complex Man

A Dark Witty and Complex Man

Poe was born in Boston Massachusetts on January 19th 1908. His parents who were both actors died when he was only three years old. After that he was raised by a wealthy man by the name of John allen. Growing up he had all of the best schooling he attended collage where gambling debts forced him to drop out and he became shunned by john allen. He was forced to try his hand at the military where he did reasonably well until disciplinary problems eventually got him a discharge.

In his adult life poe struggled, he jumped from jobs to homelessness. He tried his hand at several different editing jobs but he either quit or his employers went broke. On October 3rd 1849 Poe was admitted to a Baltimore hospital where he died four days later. No one sure why he died but rabies is suspected.

Poe was an interesting man who left behind a great legacy through his poetry and short stories. 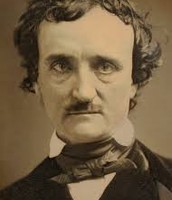 In this story it's about a man trying to get over his lover leaving him and a raven comes to the windowsill and croaks "nevermore". I think that this poem is the raven trying to tell him that his lover will never come back

The Raven by Edgar Allan Poe : The Poetry Foundation

www.poetryfoundation.org
Once upon a midnight dreary, while I pondered, weak and weary, / Over many a quaint and curious volume of forgotten lore— / While I nodded, nearly napping, suddenly there came a tapping, / As of some one gently rapping, rapping at my chamber door.

Annabel Lee is a poem about a man and his lover who's love is so strong that the angels get jealous of them. So they devise a plot to kill them. But his love for this girl is so strong that no matter what happens she will always be in his heart

This poem seems to start out as a deep heartfelt love letter. But as it goes on it seems to veer off and get confusing. Then about half way into his poem he starts talking about trying to decipher some riddle that is left within the poem. He ends it interestingly enough with the words " Cease trying you will not read the riddle, though do the best you can do". poestories.com
The full text of A Valentine by Edgar Allan Poe, with vocabulary words and definitions.

This poem starts out with a man who is very sick. He is so sick in fact that at first glance, most people think he is already dead. But he doesn't care, in fact he's happy. Dying just means that he will be leaving this world and all of its pain behind him. But no matter how ready he is to leave this world there is some one in it who means more to him than anything else. It is a girl named Annie. No matter how hard life gets, and how inviting death looks he will always try and stay alive at least one more day for Annie

For Annie by Edgar Allan Poe : The Poetry Foundation

www.poetryfoundation.org
Thank Heaven! the crisis, / The danger, is past, / And the lingering illness / Is over at last

Follow ethan osnes
Contact ethan osnes
Embed code is for website/blog and not email. To embed your newsletter in a Mass Notification System, click HERE to see how or reach out to support@smore.com