Fort Worth began as a tiny outpost next to the Trinity River,and was named after General Worth. As more citizens moved into the outpost and under it's protection from the Native Americans, Fort Worth quickly grew. Cowboys came to saloons, and entrepreneurs came to start a business. Oil and mines were built- Fort Worth had become a financial district. Today, Fort Worth is home to many attractions and famous sites in Texas history. 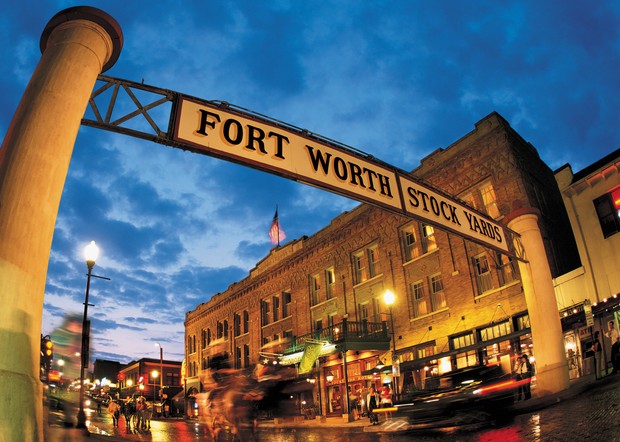 Fort Worth is now divided into many district, such as the art and financial district. Althought most historical landforms have been preserved, towering high rises and office towers are now built in the city.

Home of the Star Telegram, one of the most widely distributed papers in Texas.

The Kimbell Art Museum displays modern art from different cultures around the world, and has an architecture made of arches and stone.

The Stockyards are an important part of Fort Worth's history. Cattle are constantly brought in and out of the city for trade- The center itself is one of the most famous and richest livestock traders in the south.

The Dallas-Fort Worth International Airport

The airport is visited nationally many times a day, and has billions of passenger daily. It is a worldwide base for connecting and international flights, and is home to the American Airlines headquarters.

Fort Worth has had a economic boom ever since the settlement itself started. The Stockyards brought in much money, and the railroads brought in more settlers. Oil was then discovered, and was found in jackpots in and around Fort Worth. The main industries in Fort Worth include oil, technology, and agriculture.

Home of the Texas Technological College, AKA Texas Tech.

Follow Sarah L
Contact Sarah L
Embed code is for website/blog and not email. To embed your newsletter in your email, click HERE to see how or reach out to support@smore.com