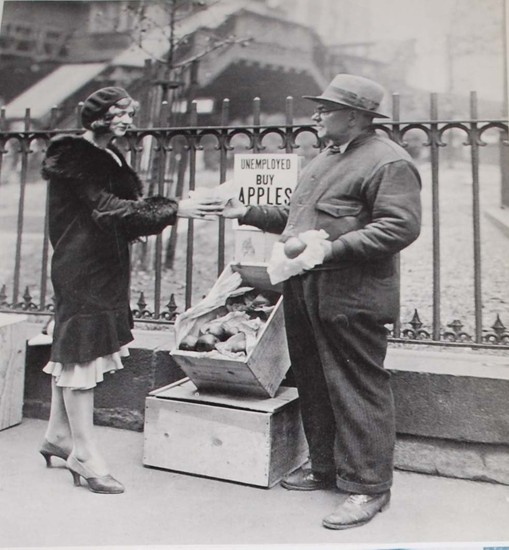 The man depicted in the picture shows a man selling apples in New York city next to nothing, just to scrape up a little cash or anything for that matter. These apple sellers or apple peddlers can make a profit of as much as $1.70 a day! That's a good profit during those times! This man here let me write his story, but told me not to use his name. He says he gets his apples every morning from an Apple Grower's Association office where he gets 72 apples, and sells each apple for 5 cents. Men like this appeared throughout American cities and towns. New York city alone had up to 6,000 apple sellers at one time! He stated too that before the crash of 1929 he was a prosperous stock broker that lost it all when his clients couldn't pay him back, and then he couldn't pay the bank back. If I could recommend something to FDR, I'd recommend him lowering shipping prices from western states, where all the food is, to cites where there is no food. It might be a drastic measure for the government to take over shipping, but it's what needs to be done to help these starving people.

A Man in a Breadline 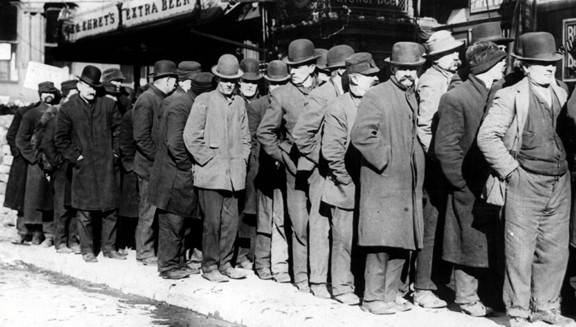 Do you see that man there with the mustache and trench coat, looking at the camera? His name is Jeremiah Johnson, he's been standing in that breadline for almost 2 hours when I came over to interview him. This particular breadline is in New York city but occurs in every city across the country. These breadlines can extend for blocks from the operation post which could be in gymnasiums, missions, and church basements. Jeremiah was telling me while we waited there together, that he use to have a large house and lots of his money in stocks. But as we all know when the stock market crashed in 1929, everyone was selling and Jeremiah was no different from the rest. He tried to sell but of course no one would buy, so he lost his house and all his money. After losing it all, he's been standing in lines almost everyday, and living in a cardboard box in an alley way. He begs everyday for a scrap of food or maybe just a single penny. A recommendation for FDR that I would give is, make more government projects for hungry Americans to make money. With these new projects, Americans can get back to work and start using that money to buy their necessities, like food. 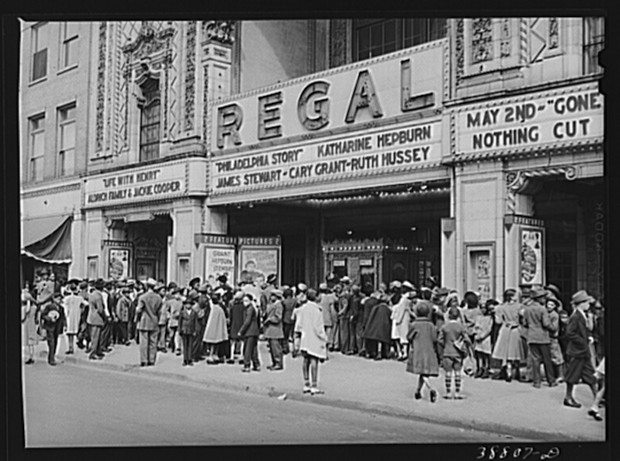 Escape into the Movies

You can't see the man I met with in this picture, but I met with him as he was waiting to get into the theater. His name was Nick McCracken, he saved every cent he could get just to go see a movie. This particular theater is in New York city, but lines like these come out of almost every theater in America. It was an away of escape even if it was just for however long the movie was. The movies played over and over again, all day and all night. So you could come into the theater and stay as long as you want, and watch the movie as many times you want. Families would save every cent just to watch a movie maybe once a month. Movie tickets would sell around 15 cents or less depending on the theater. While speaking with Nick he described what he did before the crash. He said he lived in a nice house with all modern appliances, and had a really nice job as a hardware store manager. He lost it all like everyone else when the crash hit. First he lost his job since the store couldn't handle many employees anymore. Then he lost all his modern appliances and his house since he couldn't pay all the payments for his house and appliances every month. That's how he ended up penniless and begging for every cent and escaping into the movies. If i could recommend something to FDR, I would recommend that he either make movie tickets less in price, or create more ads benefiting you to play in the movie theaters. 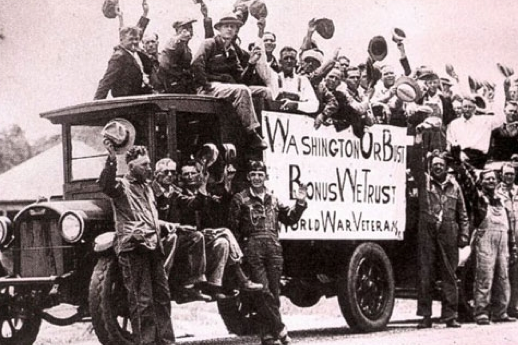 The man I interviewed is sitting on the front wheel of the truck, his name was Jonah Joehanson. He was on his way to Washington D.C., to get his government bonus for serving in the Great War. Thousands of veterans like Jonah are on the march to get an early payment of their promised bonuses that weren't due to receive till 1945. Fortunately Jonah left peacefully after congress delivered their answer to the request of an early payment. Because after Jonah left he described that around 2,000 vets stayed behind to see if congress would reconsider. But on the morning of July 28 workmen came into the camps to tear them down. But a fight broke out among vets and the workmen, the police were called in and then the army to control the riot. Many were seriously injured on both sides of the fight, an 11 month old baby was killed in the conflict as well. The conflict mainly occurred in the Anacostia Flats, but the vets realized they were beat and retreated into Pennsylvania and Maryland. Jonah said that after the war he was payed for his service but also promised a bonus that he would receive in 1945. So he later returned to his Southern farm in Virginia, he grew mainly grew corn and cotton. But like all farmers he had trouble selling his crops, and when the stock market crashed he couldn't sell any of his crops so he lost his farm to the bankers since he couldn't make any payments. That's when he gained the idea like other veterans that maybe congress will give him his bonus early so he could feed his family. But congress didn't so he's been resulting to begging for his food like so many people. If I could make a recommendation to FDR I would tell him to accept the veterans' request and give them their much deserved bonuses.

Voters in the 1932 Election 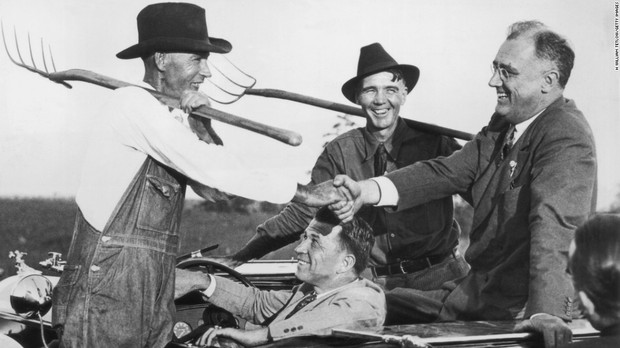 The man there, shaking FDR's hand is Eugene Martin, he's a farmer in the mid-West. He will go to the voting booths looking for someone who will change his current position for the better. Voters at that time were looking for radical change that might bring the economy back and make everyone's life better. Radical views like Socialism and Communism gain new support from desperate voters at the time as well. But before the crash Eugene was a successful farmer that prospered in his crops like corn and wheat, but now he's throwing away most of his crops since shipping prices are so high. He payed off his house before the crash so he didn't lose his house or farm like some farmers. As of now Eugene is barely feeding his family with his own crops and trying to sell whatever he can. I would recommend to FDR that he helps these farmers by lowering shipping prices so farmers can sell their crops and bring in more money for their families. Then families in the city will also be fed since shipping prices are low and more food would be there and not be wasted. 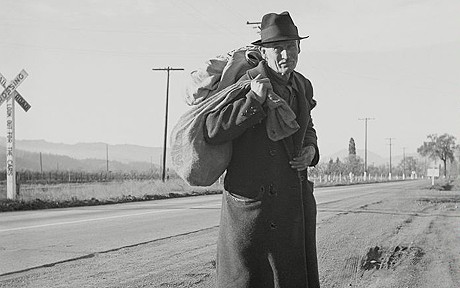 Hobos on the Move

I got the chance to meet with this man, named Bob Bogart who calls himself an average hobo. He was close to the mid-West when I met him, on his way to California like many hobos looking for a better life. Bob talks a lot about a place that every hobo wants to go to, he calls it the 'Big Rock Candy Mountain' where there's prosperity and no worries. He hitchhikes and rides the rails on the way to California. He also describes how he was a middle-class man in an average house at the time with new modern appliances. He bought his house and modern appliances all on installment plans where he needs to make a payment to the bank every month. He also put most of his money he received from his job as a store clerk into stocks. But when the stock market crashed he couldn't sell any of his stocks and lost most of his money. He got laid off then since his boss couldn't afford to keep paying him and some other employees. That's also when he had to pay his installment for the month but had no money to pay it with. He lost his house and appliances since he couldn't make anymore payments. That's how he ended up a hobo using the rails as an escape from it all. I would recommend that FDR allows hobos to ride the rails in specific cars and provide food from the mid-West that is otherwise being wasted. This might be sort of a socialist way of fixing the problem but it would help starving hobos and families that also might be riding the rails.

A Mother Who Grieves for Her Son 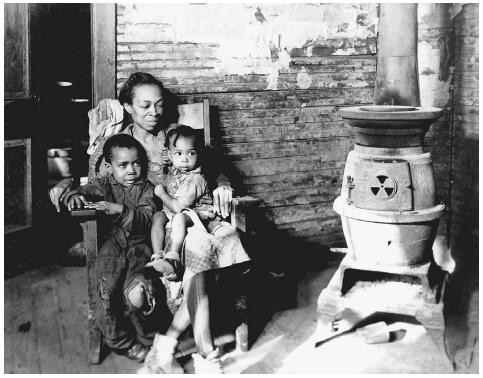 Son who has been Lynched, and A Mother who Grieves

The woman depicted in this photo is Lauren Cackle. She's holding two of her children, she use to have three. She lost her oldest son to a lynching mob in the deep South, his name was Jack Cackle. Mobs like these occurred in almost every corner of the country, other than New England. Lynching was not new to the depression or America, it occurred much earlier than that with white people being lynched for stealing things etc.. But since 1890 African Americans were more commonly lynched. Lauren was telling me what her son was like, he had many friends before his death and was a very happy young man. She said before the crash her family was doing okay on what jobs her son could get, but after the crash her son couldn't find any jobs like every other man, women, and child. So now they are mourning his death and begging for every scrap of food. I'd recommend that FDR sign the Anti-Lynching law, and then force it so these terrible lynchings can stop all together.

Families in the Mid-West 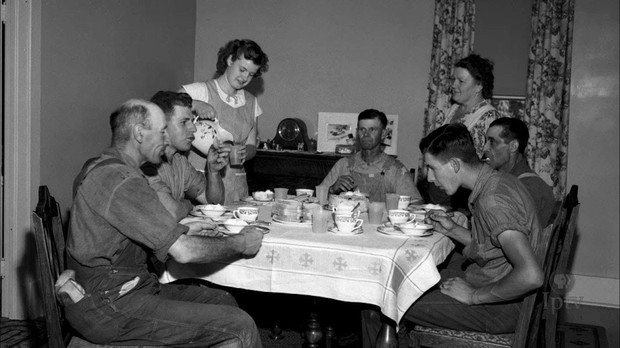 The family in this photo is from the mid-West, around Kansas. They've had this farm in the family for generations. But with the depression, and these new high winds creating what seems like a dust bowl, they don't know how long they can hold on to it. From 1933 to 1936 dust storms ravaged this part of Kansas and the farm. They can't seem to pay off their debts to the bank or sell any crops, so they've been throwing them away or eating them for dinner every night. The family described to me that before the depression they over-produced their crops for the war effort in Europe. But at wars end they had a lot of crops left over and no one was buying. They also had debts to pay to the bank for new farm equipment. But with the depression they've lost all their new farm equipment and are struggling to pay anything back to the banks. As of now they have not lost the farm, but they believe it may be in the near future. I would recommend to FDR that he help families like these with government loans, so the family can pay back the bank, and get money back into the economy, then just pay back the government later when they have money again.