how are people effected by dead zones

This can effect our lives in league city due to fish loss. people in the fishing industry are effected by this because there is no fish to catch. This issue does no occur from humans. there are no solutions to this problem. But we could move fish to another area. it would also be very costly.

Some pictures of dead zones

when the missisipi river meets the gulf of mexico 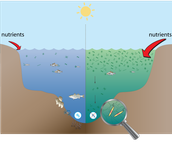