Since its start, The Detroit Artists Market has played a critical role not only in fostering Detroit’s art scene, but also in challenging public perception of art with its history of controversial, trendsetting exhibitions. Marking the DAM’s eightieth anniversary this year, The Detroit Historical Museum is hosting the exhibition, “Detroit Artists Market: The First 80 Years.”

“One of my favorite works in the collection is Noah’s Ark by Charles McGee. I’ve been drawn to the work for over 16 years. It lived in Prentis Court when I was first introduced to it. I actually miss it being displayed in a large space. Several things about Noah’s Ark appeal to me. McGee’s a local artist, someone you get to see around town. There’s the earthy colors, its size and the materials: cloth, rope, a bumble bee. The features and proportions of the people are fascinating and beautiful. I particularly like their eyes and skin tone. ” 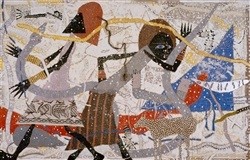 The decision, confirmed by officials after it trickled out in late afternoon news reports, also amounts to the largest municipal bankruptcy filing in American history in terms of debt.

“This is a difficult step, but the only viable option to address a problem that has been six decades in the making,” said Gov. Rick Snyder, who authorized the move after a recommendation from the emergency financial manager he had appointed to resolve Detroit’s dire financial situation.

Not everyone agrees how much Detroit owes, but Kevyn D. Orr, the emergency manager, has said the debt is likely to be $18 billion and perhaps as much as $20 billion.

For Detroit, the filing came as a painful reminder of a city’s rise and fall.

Like I said: people love art so Detroit please sell the art.

Follow Laura Benner
Contact Laura Benner
Embed code is for website/blog and not email. To embed your newsletter in your email, click HERE to see how or reach out to support@smore.com