Andrew Jackson and his peeps are in a election.

Andrew Jackson and his peeps are in a election. 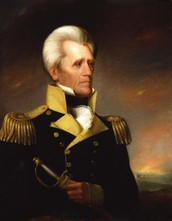 How Jackson was President

Andrew Jackson was a popular Military Hero. It all started when he won the War of 1812. He was a general who received the vote form the "common people" as a true spokesman for the people. After losing the election in 1824, four years later he finally won the election as president in 1828. The "common people" included, farmers, laborers, and frontiersmen. He was viewed as a true hero from the public and the representatives. Jackson believed in changing office-holders to give average citizens more experience in government. Jackson's two terms in office saw an expansion of American Democracy.

Some of the Democratic changes under Jackson included, voting right, choosing a president, and campaign methods. The voting rights were in the 1820's, "The states eliminated the requirement that votes own property, so that most of the white males over 21 could vote." Choosing a president included,"Selection of presidential candidates by party leaders was replaced by nominating conventions, where popularly elected members of each political party chose their candidates". Finally the Campaign Methods were, " With increased numbers of voters, new campaign methods emerged. Candidates held dinners, rallies, and public meetings. Jackson invited ordinary people to his inauguration".

Jackson greatly disliked the National Bank. He thought it gave an unfair monopoly, to wealthy moneyed interests in the Northeast. Although the bank was found to be constitutional by the Supreme Court in McCullough v. Maryland , Jackson set out to eliminate it. When Jackson was reelected as president in 1832 he ordered the removal of all federal deposits from the National Bank. This massive withdraw of funds had the effect of crippling the National Bank. Jackson ordered these funds to be put in state banks, which he felt were more agreeable to lending money to farmers. Many Americans admired Jackson, but others thought he was far to dictatorial in the way he handled the bank and other matters.

How we know Andrew Jackson today:

We mainly know him from seeing him on the twenty dollar bill. But we also know him as a greatly honored seventh president in 1828-1832.