Patti is using Smore newsletters to spread the word online.

Get email updates from Patti:

More than 30,000 murders, suicides, and accidental deaths are caused by guns yearly (Dolan, 1). Many citizens feel in danger, and some are even disgusted with violence and gun availability. There are about 150 million firearms of all types in the United States today (Dolan, 2). Guns are deadly weapons. Citizens can purchase guns at gun shows without getting a background check. This could put a gun into the wrong hands.

Stricter gun control policies should be enforced in the United States to benefit all citizens. This would save thousands of lives and make citizens feel safer in this violent society.

Some argue that they have the right to bear arms (own a gun) because of what the 2nd Amendment of the Constitution states. 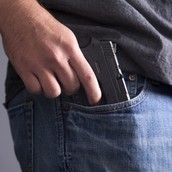 Some citizens claim to feel safer carrying a gun to protect themselves in case violence occurs.

However, most people don't realize how deadly guns are. If someone is carrying a gun on them for safety, it can lead to more violence. Also, the 2nd Amendment might not be directed at all citizens. In over 200 years, Court hasn't decided weather it refers to individuals or militias (Greenhouse).
First of all, stricter gun control would make the United States safer for all citizens. Some don't realize that after one quick pull of the trigger, someone's life could end. If the one pulling the trigger is already a criminal, they might be shooting an innocent person. We have already lost some political leaders to guns such as Martin Luther King Jr, President John F. Kennedy, and Senator Robert F. Kennedy (Greenhouse). In 1994, Congress passed an assault weapons ban and created a system of background checks for gun buyers (Greenhouse). However, there are still about 280 million firearms in private hands in the United States today and about 30% of American households have a gun in their home (Greenhouse). In 2013, there were about 876 suicides caused by firearms for people 10-19 years old ("Report Reveals Extraordinary Risks to Children of Access to Guns in the Home"). Access to guns is the leading cause of children's and teen's death in the United States ("Report Reveals Extraordinary Risks to Children of Access to Guns in the Home"). Background checks need to be made to ensure that the gun isn't being used for crime.
Do We Need Stricter Gun Control? - The People Speak
In this video, citizens in the United States and cititizens from other countries talk about their views on gun control and gun violence.
Secondly, citizens would be able to feel safer in today's violent society. 82% of youth suicides are caused a gun owned by a parent ("Report Reveals Extraordinary Risks to Children of Access to Guns in the Home")! This is the parent's fault for not safely locking up the gun. Also, most unintentional shootings and school shootings involve a gun owned by a family member. People can go and borrow someone's gun without the owner knowing what it's going to be used for. in 2013, firearm-related injuries were the second most cause of death for children and teens 1-19 years old after motor vehicles ("Report Reveals Extraordinary Risks to Children of Access to Guns in the Home"). After 2012, the unintentional gun death rate rose 15% in 2013 ("Report Reveals Extraordinary Risks to Children of Access to Guns in the Home"). This number is increasing too quickly! Having a gun in the house increases the danger of any children in the house. In 2004, almost 30,000 Americans died from gun violence. This was more than any other country. On December 14, 2012, 26 schoolchildren and teachers were shot and murdered. 20 of those 26 were six to seven year old innocent children ("Gun Control"). Background checks would ensure that guns would not be put into hands like these, and it would make schools less on edge about security.
In conclusion, stricter background checks should be made to ensure everyone's safety and to save thousands of lives. Guns are obviously falling into the wrong hands because thousands of murders, suicides, and accidental deaths are happening yearly. At gun shows, they need to start taking action and making sure that the client has no prior criminal records. This will make people feel safer living in America. Also, many children's lives would be saved. We have to protect our youth from all of this gun violence. America can become a stronger nation if we lower the amount of gun use that we have. If we don't do anything about this, America will lose more and more lives!

Patti is using Smore newsletters to spread the word online.