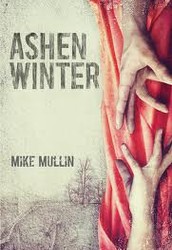 In Ashen Winter it takes place a few months after Ashfall, and it begins with Alex and Darla working on the farm. And then some people come and they try to abduct Alex's cousins. Alex tries to reason with them but it doesn't work and he almost get's shot but Darla steps in and shoots them before they kill Alex. On the bodies Alex finds a gun and takes it to his uncle, and his uncle tells Alex that it was the same gun that his parents took when they left to go find Alex.

Next Alex and Darla leave to go find Alex's parents. While on their journey they run into a group of cannibals and they take Darla. Then Alex goes to Manchester for supplies. He comes back to the cannibal's camp and he crashes a truck that he thinks has Darla in it, but he finds that it wasn't Darla it is a girl named Alyssa and her brother Ben.

Ben, Alyssa, and Alex keeps searching for Darla and the come across a camp, and they find that Alex's parents are there and that they are alive.

Afterwards, Alex, Ben, Alyssa, Alex's mom, and Alex's dad go off and they rescue Darla. But when they are rescuing Darla Alex's dad gets shot and he dies. Then the rest of them go back to Warren, and Alex's mom blames him and Darla for her husband dying.

My Favorite and Least Favorite Part Of The Book

My favorite part of Ashen Winter is when Alex finds his parents and they are all reunited.