Mahir is using Smore newsletters to spread the word online.

Get email updates from Mahir:

Have you ever heard of the Bull Trout? Well, maybe you have, but did you know that this fish which is native to Alberta is endangered!

Appearance: The Bull trout is a long, slim fish with a large head. Its back is olive-green to greyish in color and also marked with pale yellow or red spots. They can weigh up to 10 kilograms and measure from 30 to 70 cm in length. Unlike other trout the Bull trout doesn't have any black dots on its dorsal fin.

Food: Its diet consists of aquatic invertebrates, crustaceans, mollusks, insects floating on the water's surface, and sometimes even other fish such as the Mountain Whitefish.

Habitat: The Bull trout can be both migratory and migratory. Some may live in small streams near their spawning areas and others may move into larger streams, rivers, lakes, reservoirs, and all these bodies of water well-connected to the mountains. Water temperature , and ground water input affect the bull trouts growth ,maturation rates , migration, spawning, and incubation periods.

Breeding: This fish usually spawns in the early fall in small creeks. A female will dig a nest deposit up to 5,000 eggs. Then a male fish will pass by and release a milky-white sperm to fertilize the eggs. The eggs will incubate for six or seven months and hatch around March or April. One thing that distinguishes them from other trout is that they grow slowly and spawn later as well. 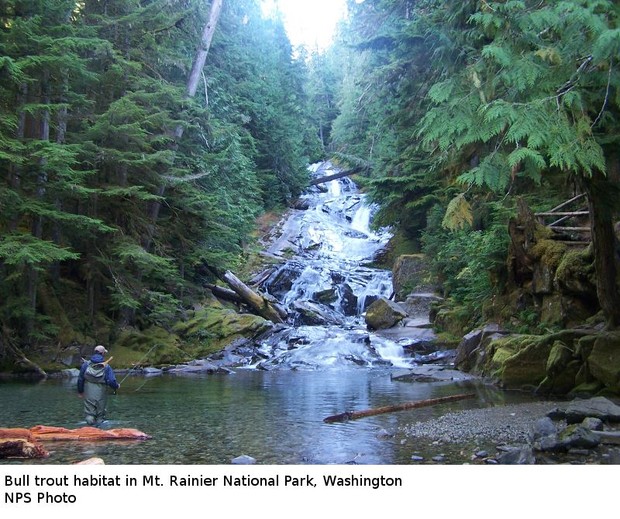 Before the early 1900's , the Bull trout was found throughout western North America. They were once common in all of Alberta's major river systems. For about half a century, the number of Bull trout has declined significantly! This is a result of things such as over fishing, habitat changes due to poor forestry, oil and gas exploration practices, and deliberate depletion of the Bull trout because prejudice knowledge of the Bull trout. Fishers are also having a hard time distinguishing the Bull trout from other species of trout, but there is a way to know. There's a saying "No black, put it back!". This is because Bull trouts have no black spots on their dorsal fins.Today all that remain, are found in the upper reaches of Alberta's Eastern Slopes. At the moment, the Bull trout is not in immediate danger of extinction but could disappear if we continue to go down the road we're going down now.

What You Can Do To Help!

The Bull trout does have hope! Even though the Bull trout is endangered there are ways that you can help! You can join or make donation to different organizations such as The Alberta Wilderness Association, the Canadian Parks and Wilderness Society, and the Canadian Nature Federation which help protect animals which are endangered. You can educate others on how to correctly identify the Bull trout, by limiting access to spawning areas around mid- August and mid-October, make sure you have proper permits and authorizations in place before starting any work that may affect the Bull trout, by contacting the nearest Fish and Wildlife Division to learn how to minimize the negative effects on Bull trout and their habitat, and also by assisting in monitoring the status of the Bull trout.

Mahir is using Smore newsletters to spread the word online.

Follow Mahir Mohammed
Contact Mahir Mohammed
Embed code is for website/blog and not email. To embed your newsletter in a Mass Notification System, click HERE to see how or reach out to support@smore.com
close