ANNUAL REPORT FROM THE PRESIDENT

ANNUAL REPORT FROM THE PRESIDENT 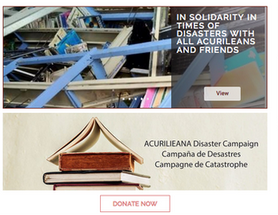 Immediately after taking up the Presidency in June 2017, there were a number of issues that engaged the President’s atttention, some of which required to be in close contact with the Executive Secretary and the Executive Council Members (ECM) & Guests. A few highlights are given below.

On 9 June 2017, ACURIL received an invitation from Mr. Guy Berger of UNESCO to participate in and promote the Global Media Information Literacy week which was celebrated from 25 October to 1 November 2017. Mrs. Dorcas Bowler, GAPMIL Executive Director and ACURIL past President participated in the event. Promotional material was widely disseminated through the ACURILNET and and SMORE platforms https://www.smore.com/6bza2-join-unesco-gapmil-week-2017


The Library Association of Trinidad and Tobago (LATT) and the Graduate School of Information and Technologies of the University of Puerto Rico also promoted this event on their websites and Facebook pages.


In Solidarity with All Acurileans in Caribbean Countries

On 12 September 2017, as a result of the passage of hurricane Irma, Presidente Kumaree Ramtahal expressed ACURIL’s sympathy to All. Irma’s path impacted colleagues in República Dominicana, Haiti, Puerto Rico, the U.S. Virgin Islands, St. Maarten, the Bahamas, Cuba, other Caribbean islands and Florida. Expressions were presented through Cybernotes https://www.smore.com/y4201-in-solidarity-in-times-of-disaster

ACURIL JOINED THE INTERNATIONAL OPEN ACCESS WEEK, October 22-28 http://www.openaccessweek.org/, and promoted ACURIL 2018RD particularly disseminating the Call for Papers, Posters and Workshops. The conference was scheduled to be held from 3 to 7 June 2017. The information was circulated through a Libguide of the Alma Jordan Library http://libguides.uwi.edu/c.php?g=738476&p=5279998 The announcement was made presenting the conference logo designed by graphic artist, Victor Diaz, of the Universidad Nacional Pedro Henriquez Ureña (UNPHU) in Dominican Republic.

Promotion of ACURIL 2018 Conference in Trinidad and Tobago

On June 22, 2017, Ms. Cheryl Peltier-Davis, Executive Council Member representing the Alma Jordan Library, along with the President, promoted ACURIL membership and the 2018 Conference at a Regional consultation for CARPHA Member States in which there were representatives from BIREME and regional libraries. This event was held at the Medical Sciences Library, The University of the West Indies, St. Augustine campus, Trinidad and Tobago. Ms. Jane Smith, ECM of University of Suriname, and Past president of ACURIL, also participated in this event.

A Research Data Management Workshop, hosted by the Alma Jordan Library, UWI, St. Augustine campus, was held on November 2-3, 2017 at the Centre for Teaching and Learning, St. Augustine Campus, Trinidad and Tobago. Ms. Lorraine Nero. Co-ordinator of the Conference Programme. and President Ramtahal promoted the ACURIL 2018 Conference, membership and the proposed Social Mediathon to regional librarians who attended this workshop.

Deepest sympathy was expressed by President Kumaree Ramtahal to all Caribbean colleagues who were affected by Hurricanes Irma and Maria. Following the passage of Hurricane Irma in early September 2017, she sent out a message in solidarity to all those affected by the hurricane, including the Philipsburg Public Library in St Maarten.

Immediately after Hurricane Irma, Mr. Miguel Asencio, Executive Council Member, advised that DLoC had begun to assist affected libraries. He reached out to ACURIL to collaborate in this initiative.

The passage of hurricane Maria which made landfall in Puerto Rico on September 20, 2017, and there was a loss of connectivity with colleagues in Puerto Rico. An emergency skype meeting was called on 22 September, 2017, with Executive Council Members and Guests. Not all members were able to join the meeting. However, two major decisions were taken:

First, to Survey the libraries that were affected – Dr. Ardis Hanson and Dr. Elizabeth Pierre-Louis were assigned this task and a message was crafted regarding the Survey being conducted in order to solicit responses; and second, To activate the Disaster Fund.

Immediately following hurricane Maria, Ms. Cheryl Peltier-Davis, Executive Council member representing the Alma Jordan Library, and President Kumaree Ramtahal discussed the devastation in the region. A funding raising effort in the form of the Social Mediathon was selected as a good idea to hold at the Executive Council’s mid-year meeting.

Even though Trinidad and Tobago was well poised to host the Mid-term in November 2017 and the Agenda was already confirmed and emailed to Executive Council members & Guests in August 2017, plans had to be changed as a result of hurricane Maria. Executive Council member Mr. Miguel Asencio was contacted by President Kumaree and he willingly accepted to have Florida International University host the meeting. The mid-term meeting was held from November 30 to December 1, 2017.

The Social Mediathon team members were: Ms. Cheryl Peltier-Davis, Mr. Miguel Asencio, Dr. Elizabeth Pierre-Louis, Dr. Ardis Hanson, Dr. Luisa Vigo-Cepeda and Ms. Kumaree Ramtahal. Several meetings via Skype were held with team members during the planning of this event. Promotion and dissemination of information were done on Cybernotes, through Smore, and emailed to our membership on Friday 24th November, 2017 https://www.smore.com/563af-acuril-s-social-mediathon-is-in ; https://www.smore.com/az5y0-acuril-s-social-mediathon-live

Acurileans and friends were invited to Join the Online Conversations on Skype, Twitter, Facebook (#ACURIL Socialmediathon); Listen to live Presentations and Interviews on Disaster Preparedness ( St. Maarten, Puerto Rico, Bahamas, Belize, Haiti, Jamaica, Trinidad and Tobago, US); Share Personal Stories on Relief, Recovery, Rebuilding in the aftermath of the hurricanes; and to Post bids in Online Auction of selected items.

TO DONATE
ACURILEANS and all supporters of Caribbean libraries, archives and museums are encouraged to support this ACURIL’s Disaster Fundraising byDonating to the recovery, relief, rebuilding:

· By Credit Card or Paypal, at https://acuril.org/donate


· One (1) Panel consisting of 5 presenters spoke on the Experiences of the Open Access Movement in Dominican Republic: Libraries, Archives and Museums


· Ten (10) Workshops, of which one was devoted to Disaster Planning by Ms. Danielle Fraser


· The Special Interest Groups and Content Area Roundtables, and the Exhibitor’s Roundtable dealing with the topic of Open Access


· Twenty five (25) posters were presented at the Caribbean Research Posters Boulevard in ACURIL 2018 República Dominicana, by students and information professionals. Mounting of the exhibit was made by collaborators from the University Pedro Henriquez Ureña Library, the National Archives, the Graduate School of Information Sciences and Technologies and Library System of the University of Puerto RicoL https://www.smore.com/1ezqk-research-posters-boulevard The presentation was coordinated by Dr. Luisa Vigo-Cepeda, Graduate School of Informatin Sciences and Technologies of the University of Puerto Rico.


· Three (3) interviews were conducted for ACURIL on the Air https://www.smore.com/rb96g-interviews-for-acuril-on-the-air Mr. José Robledo-González, of the ACURIL Executive Secretariat Technology Team documented the interviews.


· A total of one hundred and nine (109) Presenters, including contributors to Papers, participated in the event.


· A special Cultural Activity was hetld at the Vimenca Club and Visits to Libraries and the General Archives were also provided.

Other colleagues in the Team represented the diverse members of universities belonging to the Asociación de Bibliotecas Universitarias Dominicanas (ABUD). Other information and cultural institutions joined the collaborative effort, making the learning experience a most successful one.

Sincere Gratefulness is expressed to All for the real commitment and dedication in the excellent work performed.


The Call for Papers, Posters and Workshop launched 11 October, 2018

The Call for Papers, Posters and Workshops (CFP) for ACURIL 2018 were sent out to Executive Council Members and guests on 11 October, 2017 for review and feedback. The CFP was published on a LibGuide hosted by the Alma Jordan Library’s platform on 22 October, 2017 to celebrate Open Access Week. The Libguide, developed by Ms. Lorraine Nero, Programme Co-ordinartor, served as the communication link for persons interested in the conference.

The conference website was launched in March 2018 by a collaborative effort between Technology team members in Puerto Rico and the Dominican Republic: https://acuril2018republicadominicana.com/


· A special item that contributed to the conference was the programme calendar https://acuril2018republicadominicana.com/app-schedule/


· There were 13 principal Sponsors:

· There were 24 ACURILEAN Exhibitors http://acurileanexhibits.org/exhibitors-list/ that participated also in the first Exhibitors promotional event with OAApp.


· OA Passport Initiative – Smore launch on May 23, 2018. Letters were sent to Exhibitors to get buy in to participate in the event. They were all willing to participate. The event was held with several prizes awarded, including 3 Personal membership awards to be donated by the OApp team from the Alma Jordan Library, UWI, St. Augustine campus.


· Conference App/ Schedule, launched in Puerto Rico, was continued in Dominican Republic and was launched again on May 20, 2018 on Cybernotes, through Smore. Delegates could download on Mobiles. Thanks to the Technology Team in Puerto Rico.


· An Exhibitors Panel featuring the top 4 top sponsors of ACURIL 2018 was presented. They spoke on the initiative of Open Access and how it impacts on libraries, archives and museums. Mr. Luis Joel Crespo, of the Acquisitions Department, University of Puerto Rico Library System, at the Río Piedras Campus, served as moderator.


· A Daily Photo-shoot of Presenters with Executive Council members and Guests was introduced in the programme.


This has really been a Conference to be Remembered. Thanks to All that participated and made of ACURIL 2018 A Memorable One: https://www.smore.com/vhqr2-a-conference-to-be-remembered.