dana is using Smore newsletters to spread the word online.

Get email updates from dana:

Seven Wonders of the World

Seven Wonders of the World

Sea of Salt has several names ,one of which is called the Dead Sea.

Dead Sea is located on the border between Israel and Jordan.Dead Sea salt concentration is 34.2% - ten times the concentration of salts in the Mediterranean.It is a region of desert climate characterized by hot and dry high evaporation rates. The sea is salty body of water in the fourth.His beaches lowest place in the land, and the water level stands at 427 meters below sea level. 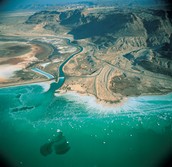 dana is using Smore newsletters to spread the word online.