It's going to be out of this world!

It's going to be out of this world!

Come and visit the best gas giant planet Saturn! Once in a lifetime opportunity!
Get Directions

Saturn is the second biggest gas giant planet and the second biggest planet in our solar system. Saturn is big enough to hold more than 760 earth's. The planet is made up of mostly hydrogen and helium. Also saturn is 95 times earth's mass! Saturn has the lowest density of all the planets, it is the only planet that it's density is less than water. For example is there was a big bathtub holding saturn, saturn would float. Saturns magnetic field is 578 times stronger than earth's! Saturn has about 62 moons! Saturns rings are mostly mademup of ice and rocku particles. Saturn 4 main groups of rings and three fainter groups. So overall saturn has 7 groups a rings with many smaller rings in each group. However, the exact number of rings is not known. Saturn is intriguing as it is beautiful! 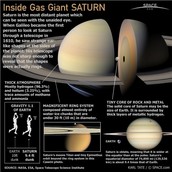 Saturn is so much better than the other planets

First of all Saturn is obviously the best planet. Why? Well first off Mercury is a sunblasted tiny planet. Mercury is so small it is more a moon than a planet. Venus is pretty and all but it's atmosphere is not great. Plus Venus is so hot it could melt lead. Apparently Mars was once a blue planet. But now is it a dried out hot red planet. Where do I even start with Jupiter. Well first off Jupiter is a big dull pumpkin. Just because it is the biggest does not make it the best. In fact Jupiter is going to need to step it up if it wants to be the best because Saturn is a beautiful sight and Jupiter is just a sad jack-o-lantern. Uranus is just like a Tuesday because there is nothing really special about it. It is cold amd far from the sun. Neptune is the frozen planet. Even in the summer is is freezing cold. I'm sorry but unless you are Elsa the ice queen I don't think anyone can handle that cold of temperatures.

Why you should visit Saturn

Saturn is without a doubt " King of the Rings"! If you love exercise and can't live without do not fear because Saturns rings can be used as a treadmill! Saturns rings strech outwards for thousands of miles so you never have to worry about not being fit ever again. Also Saturn may be the oldest planet in the solar system! How cool is that, you could visit the first planet to ever form in the solar system! Saturn has 106% of earth's gravity! That means Saturn has even better gravity than earth does! Have you ever wondered why Saturn has all of those rings? Well Saturn has all those rings because Saturn has been in love so many times! And if you visit and you want a love life you are garenteed to find love! Also Saturn has so many amazing colors! Saturn has maybe 10 beautiful colors! Even Saturn's rings have different colors. So if you have a colorful mind or like art you should definitely come to Saturn! Saturn is beautiful inside and out! Saturn is obviously the president of the solar system!