Would provide 150 billion litres or equal to one third of Melbourne's annual water requirement. Would create jobs within the local economy and secure a constant water supply for all Melbourne's future needs.

The power needed to run the plant would be enormous. Much fossil fuel would be burned and green house gas emitted into the atmosphere. This would cost due to the carbon tax but also on an environmental scale.

The plant could severely danger wild life living in the area of its residence. 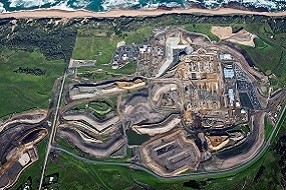 An idea like this should have to be proposed to the federal government and reasoning given before they would consider the benefits and any other variables, then they would come to a conclusion.

This was however not the case and the plant was not open for consultation, which is why it became such a controversial issue.

In my opinion the plant is a good theory that wasn't planned, or put in to action appropriately. All the economic benefits and disadvantaged were not considered properly and community input was denied.