Alena is using Smore newsletters to spread the word online.

Get email updates from Alena:

Have YOU seen them?

There has been a report of three missing boys. Thomas Sawyer, Huckleberry Finn, and Joe Harper. Many of the townspeople are quite worried.

"Oh where has my poor Joe gone to?" Mrs. Harper sobbed.

"First a murderer was on the loose in the town, now Tom is gone!" Mrs. Aunt Polly cries.

Huckleberry Finn's dad chose not to speak but we believe he also doesn't know where the boys has wondered off to. The boys have had history for doing mischievous things but nothing this extreme. People believed that they went out swimming one day and drowned. Their funeral will take place soon. If you see them, please contact the sheriff immediately. 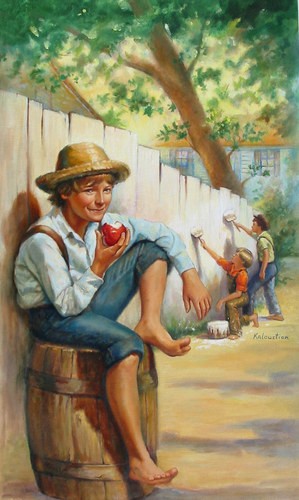 The Insides of Twain's New Book

Have you heard of any good books lately? Well hurry and get The Adventures of Tom Sawyer. In this article, we interviewed Mr. Twain about his book.

Q. Mr. Twain, in your new book, I enjoyed you allusion to Robin Hood when the boys were playing games on the island. Why did you choose that particular allusion?

A. Well, I too enjoy the stories of Robin Hood and used to play Robin Hood with my fellow playmates.

Q. Were you quite mischievous like Tom in the story?

A. I suppose. I wasn't as clever as Tom Sawyer but I did have many tricks. I think my writing shows that he is clearly smart but learns from his mistakes.

Q. In your story, there was a murder scene. Has this ever happened to you before in reality?

A. No. I made that part up. Though some parts are real, I still have unreal parts in my Tom Sawyer story.

Alena is using Smore newsletters to spread the word online.