The Story of Macbeth

The Story of Macbeth

Macbeth’s downfall was very dramatic and brutal, Lady Macbeth is very responsible for his downfall because she pressured him into many things which triggered this. Lady Macbeth guilted Macbeth into killing the king by calling him a coward, “Such I account thy love. Art thou afeard To be the same in thine own act and valor As thou art in desire? Wouldst thou have that Which thou esteem’st the ornament of life, And live a coward in thine own esteem, Letting ‘I dare not’ wait upon ‘I would,’ Like the poor car i’ the adage?” (Shakespeare 43). Lady Macbeth criticizes Macbeth to secure the crown and calls him a coward, this supports the downfall of Macbeth because Lady Macbeth pressured Macbeth into killing Duncan which scarred him. Lady Macbeth is worried that Macbeth will not be able to do this task, “Alack, I am afraid the have awaked, And tis’ not done! The attempt, and not the deed, Confounds us. Hark! I laid their daggers ready; He could not miss ‘em. Had he not resembled My father as he slept, I had done’t (Shakespeare 53). Lady Macbeth is ready to complete the task if Macbeth becomes too cowardly to do it. Lady Macbeth pressured Macbeth into completing this deed, even though he did it, he regrets it, “Had i but died an hour before this change I had lived a blessed time; for from this instant There’s nothing serious in mortality; All is but toys renown and grace is dead; The wine of life is drawn, and the mere lees Is left this vault to brag of” (Shakespeare 67). Macbeth is regretting doing his crime and thinks that living life is meaningless. 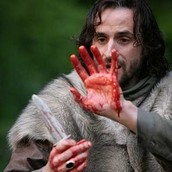 You can see Macbeth's guilt in his eyes and there is blood all over his hands because he has just killed Duncan. He extremely regrets this task and has permanent guilt. 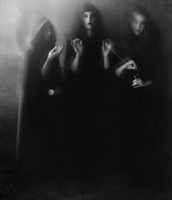 The three witches were the first people to tell Macbeth that he was going to become King and how to do it.

Literary devices are often used in Macbeth. Dynamic character would be an example of one, this is used because Lady Macbeth completely changed by the end of the story. She went insane because of the deed her and Macbeth did. A doctor and a gentlewoman came to visit her, "A sleepwalking Lady Macbeth is observed by a concerned attendant, or gentlewoman, and a doctor. Lady Macbeth appears to be washing imagined blood from her hands. Her actions and confused speech greatly concern the doctor, and he warns the attendant to keep and eye on Lady Macbeth, fearing that she will harm herself" (Shakespeare 153). The gentlewoman then explains to the doctor, Lady Macbeth's condition. The doctor gets frightened and tells the gentlewoman that he can do nothing for her condition. There is also many tragedies in this story. Lady Macduff's son was murdered, "He has killed me, mother. Run away, I pray you! (Shakespeare 135). This is significant to the story because it shows that Macduff was dead, or left for battle, and the son died. This is a tragedy because someone died. Symbolism is another literary device that is shown in the story. When Macduff walks in with Macbeth's head it shows how Macduff has accomplished his goal, "[Enter Macduff, with Macbeth's head.] Macduff. Hail, King! for so thou art. Behold where stands The usurper's cursed head. The time is free. I see thee compassed with thy kingdom's pearl, That speak my salutation in their minds; Whose voices I desire aloud with mine- Hail, King of Scotland" (Shakespeare 183). This is a good example of symbolism because Macduff now has something to prove he accomplished his deed. This is very significant to the story because it shows Macduff wont the battle and Macbeth was killed.

This song connection is related to my explanation because Lady Macbeth took away the best Macbeth he could be. Macbeth was a genually good person before Lady Macbeth pressured him into killing Duncan. This song is called "Cold as You" and it is by Taylor Swfit. I used this song because the lyrics I took from it say that "...when you take you take the very best of me". This means that, when Lady Macbeth wanted something, she took from Macbeth. In the play Lady Macbeth took Macbeth's good concious and turned it very bad. He couldn't sleep, eat, or do anything. 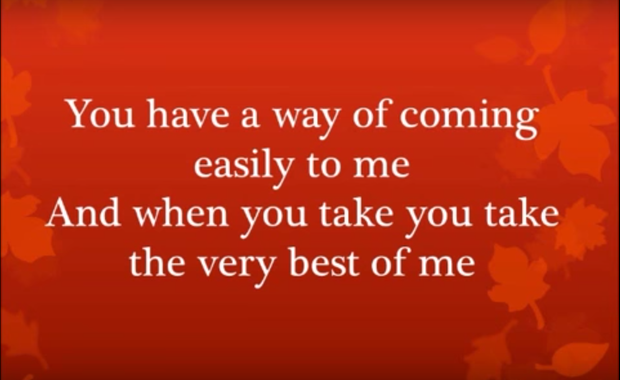 The movie I chose to connect with Lady Macbeth being the cause of Macbeth's downfall is "The Other Woman." The actors that resemble Lady Macbeth are: Cameron Diaz, Kate Upton, and Leslie Mann. This movie shows a good comparison to Macbeth because the actresses are planning or plotting on how to ruin their boyfriends life. The man, Nikolaj Coster-Waldau, or the boyfriend, is dating all three of the women. When the women meet all of each other, they begin to find out what the man has been up to. The women eventually ruin his life and his reputation is ruined.
youtube.com/watch?v=oDcaZ3StTfI