Alyx is using Smore newsletters to spread the word online.

Get email updates from Alyx:

What are the main theories as to what happened to Roanoke?

What are the main theories as to what happened to Roanoke?

Background: What happened to Roanoke?

Roanoke, an island near present-day North Carolina, was one of the first English attempt at a colony in the New World. Settlers arrived in 1587 and soon after John White, their governor, went back to England to get more supplies. Unfortunately fighting broke out between England and Spain so White wasn't able to return until 1590. When he got back to Roanoke all the colonists had disappeared and the only clue as to where they went was the word "Croatoan" carved in a wooden post.

So what happened to the colonists?

Four hundred twenty-six years later, historians still don't have a definite answer as to where the colonists went/what happened to them. However there are a few main theories and hypotheses that have been created to try to explain the mysterious disappearance of the colonists of Roanoke. 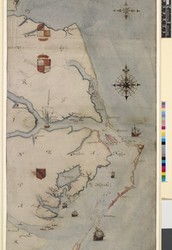 A New Theory Emerges from an old Map-- "Site X"

Alyx is using Smore newsletters to spread the word online.