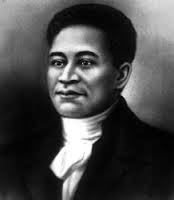 Crispus Attucks was a slave,his mother a Natick Indian ,and his father a slave from Africa brought to America.Attucks ran away from his owner William Brown at 27. He ended up in Boston.Not much longer after that Crispus got a job as a dockworker and a ropemaker.Then one day William Brown put an advertisement on Cripus and offered 200 pounds if returned.Even though Crispus could've hid somewhere else he decided not to.In Crispus spare time he would attend meetings with other patriots about taxes

What started the Boston Massacare

Attucks was eating dinner when he noticed a patriot and a British soilder arguing.The patriot claimed that the soilder didn't pay for his haircut.Attucks decided to join in on this argument.A few minutes later,the partiots started to throw sticks and snowballs at the soilders.Crispus threw a stick at the captin and one of the soilders.The captin killed Attucks shortly after that.

Crispus was buried at Faneuil Hall.Crispus has inspired many people.He has inspired the abolitionists in the 19th century and the civill rights activists in the 20th century.There are many schools and daycares that are named after him.There is also a dollar coin with his face on it